The Conference Board reports a big jump in consumer confidence between August and September.

“Consumer Confidence increased sharply in September, after back-to-back monthly declines, but remains below pre-pandemic levels,” said Lynn Franco, Senior Director of Economic Indicators at The Conference Board. “A more favorable view of current business and labor market conditions, coupled with renewed optimism about the short-term outlook, helped spur this month’s rebound in confidence. Consumers also expressed greater optimism about their short-term financial prospects, which may help keep spending from slowing further in the months ahead.”

Consumer sentiment continued to improve in late September, with the Sentiment Index reaching its highest level in six months. The gains were mainly due to a more optimistic outlook for the national economy. While consumers have anticipated gains in the national economy ever since the April shutdown, the September survey recorded a significant increase in the proportion that expected a reestablishment of good times financially in the overall economy.

A K-shaped recovery is foreshadowed in this further comment.

The Daily Shot has produced the following graph, showing the increase in consumer sentiment and the long distance yet to climb. 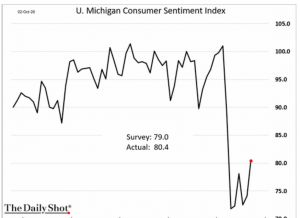 See also this U Michigan table.

While this is all to the good, today’s comments from Federal Reserve Bank Chairman Jerome Powell underscore concern about the strength of the recovery. After describing how the federal fiscal and monetary policies supported households and businesses and acknowledging the risk of an increase in COVID-19 cases slowing the recovery, Powell says,

A second risk is that a prolonged slowing in the pace of improvement over time could trigger typical recessionary dynamics, as weakness feeds on weakness. A long period of unnecessarily slow progress could continue to exacerbate existing disparities in our economy. That would be tragic, especially in light of our country’s progress on these issues in the years leading up to the pandemic.

The expansion is still far from complete. At this early stage, I would argue that the risks of policy intervention are still asymmetric. Too little support would lead to a weak recovery, creating unnecessary hardship for households and businesses. Over time, household insolvencies and business bankruptcies would rise, harming the productive capacity of the economy, and holding back wage growth. By contrast, the risks of overdoing it seem, for now, to be smaller. Even if policy actions ultimately prove to be greater than needed, they will not go to waste. The recovery will be stronger and move faster if monetary policy and fiscal policy continue to work side by side to provide support to the economy until it is clearly out of the woods.

In other words, he calls on Congress to pass another stimulus package. The AP report puts a finer point on it.

Strong financial support from the government and the Federal Reserve have spurred a solid recovery from the pandemic recession, but the rebound may falter without further aid, Fed Chair Jerome Powell warned Tuesday.

Powell said that government support — including expanded unemployment insurance payments, direct payments to most U.S. households and financial support for small businesses — has so far prevented a recessionary “downward spiral” in which job losses would reduce spending, forcing businesses to cut even more jobs.

Washington Research Council economist Kriss Sjoblom has shown how that government support has worked to sustain consumption and incomes to date.

Powell has been consistent, the report points out. Unfortunately, so has been the stalemate.

Powell has repeatedly urged Congress to provide additional stimulus, in previous speeches and in testimony before Congress. Negotiations between House Speaker Nancy Pelosi and Treasury Secretary Steven Mnuchin are ongoing, but prospects for a deal appear dim.

The uptick in confidence is good. Ideally, Congressional and executive leaders will act to bolster it.