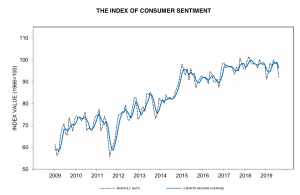 Consumer sentiment declined in early August to its lowest level since the start of the year. The early August losses spanned all Index components. Although the Expectations Index recorded more than twice the decline in August as the Current Conditions Index (-8.2 versus -3.3), the Current Conditions Index fell to its lowest level since late 2016. Monetary and trade policies have heightened consumer uncertainty—but not pessimism—about their future financial prospects. Consumers strongly reacted to the proposed September increase in tariffs on Chinese imports, spontaneously cited by 33% of all consumers in early August, barely below the recent peak of 37%. Although the announced delay until Christmas postpones its negative impact on consumer prices, it still raises concerns about future price increases. The main takeaway for consumers from the first cut in interest rates in a decade was to increase apprehensions about a possible recession. Consumers concluded, following the Fed’s lead, that they may need to reduce spending in anticipation of a potential recession.

We wrote of these concerns here and here. Curtin says consumers will probably cut spending, “while keeping the economy out of recession at least through mid 2020.”

Despite the drop, the survey remains at a historically high level. Longer-term inflation expectations firmed a bit this month. Consumers now expect inflation of 2.6% in five to 10 years, up from 2.5% in July, while household expectations for near-term inflation strengthened slightly in August to 2.7% from 2.6% in July.

Still, the August survey indicated some concerns about the future pace of income and job gains. U.S. households have been benefiting from a strong labor market and steadily rising wages. Employers added jobs at a steady pace in July and unemployment was a low 3.7%, the Labor Department said earlier this month.

The uncertainty and mixed signals continue to tamp down economic growth.