Last December, we noted Seattle’s precedent-setting ordinance allowing “for-hire” drivers (think Uber and Lyft) to form a union. In March, the U.S. Chamber of Commerce challenged the ordinance with a lawsuit, as GeekWire reported.

“This ordinance threatens the ability not just of Seattle, but of every community across the country, to grow with and benefit from our evolving economy,” Amanda Eversole, president of the Chamber’s Center for Advanced Technology & Innovation, said in a statement. “Technology companies are leading the charge when it comes to empowering people with the flexibility and choice that comes with being your own boss, and that is something to be championed, not stifled.”

…The Chamber’s lawsuit contends that the ordinance violates federal law and would “result in a balkanized set of labor schemes that would negatively impact the sharing economy and jeopardize the flexible work schedules and earnings opportunities that economy provides to millions of people nationwide.”

A Seattle Times commentary by Elizabeth Kennedy, a law professor at Loyola University Maryland, recently praised the Seattle regulation, blasted the Chamber lawsuit, and argued for more municipal “innovation” in regulating the sharing or gig economy.

And an extended article on labor relations in the sharing economy published in the June issue of Governing Magazine gives prominent space to the city’s regulations. Writer J.B. Wogan says,

The Seattle law is novel in the sense that its supporters aren’t challenging Uber’s classification of drivers as independent contractors. “They don’t fit neatly either as the employee or the independent contractor,” [Seattle City Councilmember Mike] O’Brien says. “I think it’s possible that we need more classes of employment, but that may be years in the making.” In fact, some countries, such as Canada and

Germany, already have an intermediate classification called “dependent contractor” for freelancers who work mostly for one business and receive some protections, but not as many as full-time employees.

As with just about everything else in the debate over drivers’ employment status, the Seattle ordinance’s future is uncertain. In March, the U.S. Chamber of Commerce sued the city, arguing that the unionization ordinance violates federal antitrust laws. Even if the law survives the chamber’s challenge, it would still be at least a year before Uber and Lyft drivers could take a vote on whether they want to form a union.

The city continues to explore regulatory innovations, turning to rental housing services like AirBnB and Vacation Rentals By Owner (VRBO). Last month the Seattle Times editorial board said the city should “tread carefully” with new regulations in that market.

GeekWire reports on the response to proposed regs.

Short-term rental operators, business owners, homeless people, and other members of the Seattle community packed in, standing in back and along the sides when the chamber’s 100 or so seats filled. Issues of housing affordability and the tech-driven population boom brought them together. 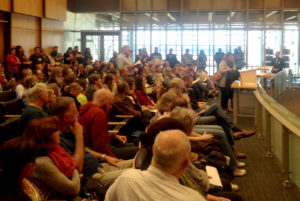 Many in attendance were part of The Coalition for Seattle Short-Term Rentals, a new group that has emerged as a response to proposed regulations on sites like Airbnb. The coalition claims that short-term rentals comprise about 1 percent of Seattle’s total housing, a number too small to have a meaningful impact on Seattle’s housing market.

The article by Monica Nickelsburg should be read in its entirety. Also, the Seattle Times reports on the hearing.

The short-term rental hosts warned council members the regulations would prevent them from making money they use to pay their mortgages and send their children to college and would stop them from providing inexpensive accommodations to visitors to the city, sometimes to see relatives hospitalized with illnesses.

Some suggested the city raise taxes on hosts to help build low-income housing rather than restrict short-term rental operations that contribute millions of dollars to the city’s economy. That would require a change in state law, however.

It’s a complicated issue, an emerging market, and a municipal regulation with regional implications. And it’s one that will be tackled soon, according to the Times.

The council is tentatively scheduled to vote on the proposed regulations late next month and may tweak them in the meantime.

The counsel to “tread carefully” sounds good to us.