Yesterday’s Senate Ways and Means hearing on SB 5607, the Republican education finance and reform bill, provided a lot of useful information. You can watch TVW coverage here, the lengthy initial staff briefing on the bill is particularly informative. All committee materials can be found here. The bill report does a good job of summarizing the measure (to the extent anything this sweeping can be easily summarized). 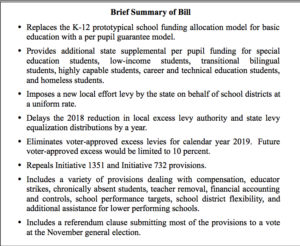 Also, staff provided district-by-district analysis of how the measure would affect funding levels across the state. Here’s the statewide summary: 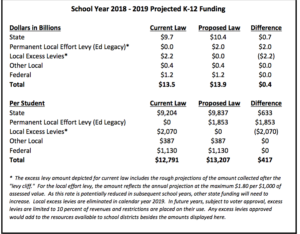 There’s also this further analysis from the Washington Research Council.

The Association of Washington Business reports,

The plan would cap property tax levy rates and move to a per-student model of school funding, similar to the funding system used in Massachusetts. The state would pay at least $12,500 for each student, said Sen. John Braun, R- Centralia and lead budget writer.

The plan meets an AWB priority, which is support for career and technical education.

Superintendent of Public Instruction Chris Reykdal, who testified yesterday, pledging his cooperation to lawmakers as they worked on the McCleary fix, said in a press release last week,

The Caucus’s proposal shows that Republicans are serious about solving the funding problem and that it understands additional resources will be needed.

The proposal itself is very comprehensive. It would create a guaranteed funding level for each and every student. The level would be enhanced for students in special programs, such as English learners or students in special education or those who are low-income or homeless, recognizing those students’ additional needs. That funding level would be paid for, in part, by a state property tax capped at $1.80 per $1,000 of assessed value.

I appreciate the emphasis on accountability and on providing additional support for underachieving students.

The shifting property tax burdens we discussed here remain one of the several critical points of contention. But we’re encouraged that the conversation has begun.