We’ve commented frequently on the urban-rural economic divide. For example, we written that nine of ten jobs created since 2007 have been in metros with populations of 1 million or more. Some scholars are now suggesting that the population densities that drew economic investment and job creation may complicate the post-pandemic recovery.

…a new Brookings analysis of county-level infection and economic data shows that the nation’s COVID-19 case load not only remains heavily concentrated, but that the hardest-hit counties and metro areas constitute the very core of the nation’s productive capacity. The new analysis underscores the extent to which discussions of when to “restart” the nation’s economy will need to focus on conditions in the nation’s most-impacted urban hubs.

As the map below shows, King County is among those “most-impacted” hubs. 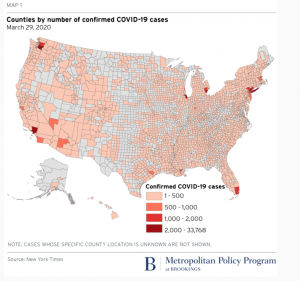 Although the data are a bit dated, the urban concentration most likely holds. Brookings analysts Mark Muro, Jacob Whiton, and Robert Maxim write,

Total up the numbers and it becomes clear how heavily the nation’s COVID-19 infections concentrate in a short list of economically central, often job-rich counties on the coasts and the Great Lakes region. The nation’s 50 hardest-hit counties support more than 60 million jobs and $7.4 trillion in economic output, good for 30% of the nation’s employment and 36% of its GDP.

Zoom in on the 15 hardest-hit counties, and the numbers suggest that the nation is losing crucial parts of local economies that account for nearly 26 million jobs and $3.3 trillion in output, representing 16% of U.S. GDP and 12.9% of employment. In other words, the health crisis and labor market breakdown of just a few hard-hit urban counties is undercutting the entire nation’s economic might.

The clustering effect that has made these urban centers the economic drivers they are now poses a recovery challenge, they write.

Specifically, the extremity of the health crisis in the nation’s central economic engines suggests policymakers would do well to check in with the nation’s hardest-hit metro areas before encouraging states to end their stay-at-home orders.

After all, this new information shows that it is precisely the places that disproportionately anchor the nation’s economy that are coping with the greatest burdens of the pandemic. Governors and President Trump will need to ensure the pandemic is fully under control in America’s core hubs before trying to “reopen” America for business.

In the Wall Street Journal, Josh Mitchell explores the same theme of economic concentration and the effects of the lockdown orders. He cites research by Moody’s Analytics.

The analysis shows how the national economy is tied disproportionately to the fate of big metro areas. A tenth of the drop in national daily output is tied to just three counties: Los Angeles; New York County, which is Manhattan; and Cook County, lll., home of Chicago.

The accumulated evidence of the pandemic’s outsize influence on large metros has led some analysts to suggest the post-pandemic geographic landscape will change. In Fortune, Joel Kotkin writes,

For the better part of this millennium, the nation’s urban planning punditry has predicted that the future lay with its densest, largest, and most cosmopolitan cities. Yet even before the onslaught of COVID-19, demographic and economic forces were pointing in the exact opposite direction, as our biggest cities—New York, Los Angeles, and Chicago—all lost population in 2018, according to the U.S. Census Bureau.

The impact of the coronavirus pandemic may be too early to measure, but it’s clear that the great preponderance of cases, and deaths, are concentrated—at least as of now—in dense urban centers, most particularly Wuhan, Milan, Seattle, Madrid, and New York City. This crisis is the right moment for the world to reconsider the conventional wisdom that denser cities are better cities.

Although cities have historically bounced back from plague and pestilence, he writes, technology provides alternatives that weren’t available in the past.

The city of the past was someplace you had to be if you wanted to play on the national, and even more so, global stage. But our increasingly networked economy enables companies and people to operate far from the traditional urban centers.

The digital economy has allowed many millennials and large companies to shift their home bases. As discussed in the Heartland Forward report I led, they are relocating to less expensive urban areas such as Dallas/Fort Worth, Nashville, Austin, Orlando, and Columbus…

The biggest long-term threat to dense cities could prove to be the shift to online working. Even before the coronavirus outbreak, remote work has grown 173% over the past 15 years among non-self-employed workers, according to GlobalWorkplaceAnalytics.com.

It’s advisable never to bet against cities. The economic benefits of clustering are powerful. Yet, as Kotkin suggests, the dispersal of activity that had already begun may well accelerate in a post-pandemic environment.