At Opportunity Washington our policy agenda provides a roadmap for

expanding Washington’s culture of opportunity to individuals, families, employers, and communities in every corner of the state.

Recent information from Stateline underscores the importance of pursuing policies that promote economic vitality and opportunity. Economic diversification, including a strong manufacturing base, plays a major role in our vision of shared prosperity. Our foundation report noted the importance of manufacturing, noting the recent decline in employment.

The makeup of the state’s private sector workforce also has changed since 2000. Private sector employment has grown 12.5 percent, to 2.5 million jobs (out of the state’s total non-farm employment of 3.1 million)… Over the same period, manufacturing declined by 15 percent, losing 50,400 jobs. These jobs tend to have high multipliers, so declines have a strong ripple effect through the economy.

New research from Stateline provides a national perspective. The map below depicts the decline in personal income, which the analysts associate with a decline in manufacturing employment. (It’s an interactive map, click the Stateline link to see specific counties.) 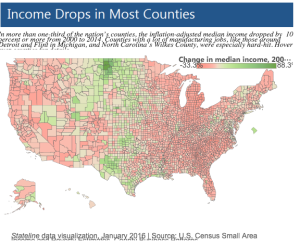 As you can see, most Washington counties post declines since 2000. Stateline writes,

In more than one-third of the nation’s counties, the inflation-adjusted median income has dropped by 10 percent or more since 2000, according to a Stateline analysis of the Small Area Income and Poverty Estimates from the Census Bureau.

In many of them, the drop in income can be traced to the disappearance of manufacturing jobs.

Diversifying Washington’s economic base has helped; for the most part, the income decline here has been relatively modest compared to other parts of the nation. And we’re beginning to see more more recovery, at least in part as a result of prudent tax incentives to support manufacturing. Our foundation report identified other issues affecting manufacturers:

In its latest survey of manufacturing companies, the tax and consulting firm McGladrey found that 73 percent of Washington employers cited state regulations as negatively impacting growth, higher than any other state.

In 2012, manufacturers told the Association of Washington Business (AWB) that they experience difficulty in recruiting high-level workers (managers and engineers), citing shortfalls in math and critical-thinking skills.