Economic news is always “mixed” these days. Or so it seems to us.

Let’s start with some decidedly good and counterintuitive analysis from The Brookings Institution.

After a decade when most Americans saw their incomes decline, the latest Census Bureau income data contain very good news: A majority of U.S. households racked up healthy income gains in 2013 and 2014.

The chart shows changes by age and race/ethnicity. 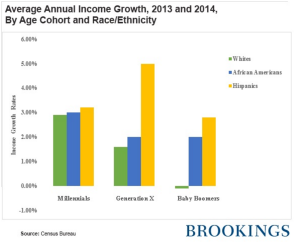 So, maybe things are a little better than we thought. Yet, the National Association of Manufacturers offers an analysis that aligns more with popular perceptions.

The Bureau of Economic Analysis said that the U.S. economy grew just 0.5 percent in the first quarter of 2016, signifying a sluggish start to the year. This was slightly below the consensus estimate of real GDP growth of 0.7 percent, and it was down from 1.4 percent growth in the fourth quarter of 2015. In many ways, the data for the first quarter mirrored the trends seen in the prior report, with drags on growth coming from fixed business investment and net exports. Consumer spending on goods was the difference-maker in this release.  While personal consumption continued to be one of the brighter spots, adding 1.27 percentage points to headline GDP growth, that increase stemmed almost entirely from spending on services. The gain from goods spending was negligible – adding just 0.03 percentage points. This finding is consistent with the disappointing retail sales numbers observed year-to-date, particularly for durable goods, and it was another sign that Americans have pulled back on their purchases as a result of anxieties in the economic outlook.

NAM chief economist Chad Moutray writes that consumer caution has been mirrored by business leaders, who have pulled back on capital investment. Continuing the theme of “mixed” news, he concludes,

Still, some of the recent sentiment surveys have begun to reflect some stabilization for manufacturers, and business leaders tend to be cautiously optimistic about sales over the coming months. If true, we would expect a better data moving forward. My current forecast for the second quarter is 2 percent growth…

Moutray also expresses some optimism based on another “mixed” report from the Kansas City Fed.

He concludes by urging policymakers to adopt “pro-growth” initiatives outlined in NAM’s Competing to Win publication.

While the NAM Competing to Win report focuses on national policies, it offers good insight into what manufacturers believe is necessary to promote economic expansion. Our roadmap for shared prosperity provides some solid recommendations for legislative consideration. We believe that that can help turn “mixed news” into “good news.” It’s time.