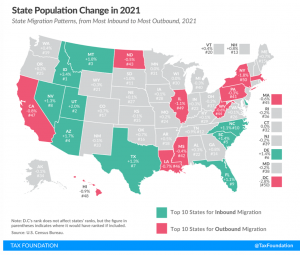 People voting with their feet has become a common theme. It was nicely captured back in 2004 in The Big Sort, a book by Bill Bishop that described our Americans were increasingly flocking to places that were “most compatible with [their] lifestyle and beliefs.”

A review of domestic migration by Jared Walczak with the Tax Foundation suggests the criteria should be expanded to include tax policy. The map at the top of this post shows the ten states that gained and lost the most population in 2021 as.a result of people packing up and moving. Washington was in neither category.

Americans were on the move in 2021, and they chose low-tax states over high-tax ones. That’s the finding of recent U.S. Census Bureau population data, along with commercial datasets released this week by U-Haul and United Van Lines.

Income tax supporters in our state may want to take note of this:

The individual income tax is only one component of overall tax burdens, but it is often highly salient, and is illustrative here. If we include the District of Columbia, then in the top one-third of states for population growth since the start of the pandemic (April 2020 to July 2021 data), the average combined top marginal state and local income tax rate is 3.5 percent, while in the bottom third of states, it is about 7.3 percent.

Six states in the top third forgo individual income taxes (Florida, Tennessee, Texas, Nevada, New Hampshire, and South Dakota) and the highest top rate is Maine’s 7.15 percent. Among the bottom third, four jurisdictions—California, New Jersey, New York, and the District of Columbia—have double-digit income tax rates, and the lowest rate is in Pennsylvania, where a low state rate of 3.07 percent is paired with some of the highest local income tax rates in the country. Five states in the bottom third have local income taxes; none in the top third do.

Not content to rest on their laurels, nine states in the top third either implemented or enacted individual or corporate income tax cuts in 2021.

People move for many reasons. Sometimes taxes are expressly part of the calculation. Often they play an indirect role by contributing to a broadly favorable economic environment. And sometimes, of course, they play little or no role. The Census data and these industry studies cannot tell us exactly why each person moved, but there is no denying a very strong correlation between low-tax, low-cost states and population growth. With many states responding to robust revenues and heightened state competition by cutting taxes, moreover, these trends may only get larger.