More evidence that steep increases in the minimum wage exact a cost on small businesses and their employees comes in a post from economist Mark Perry. The chart below tells the story: 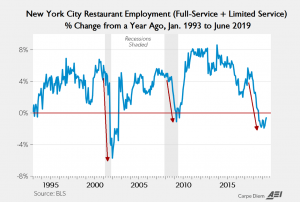 Of the three steep declines in year-to-year employment, two came during recessions. The third came with the rise in the minimum wage. Perry writes,

The chart above shows graphically the New York City “restaurant recession” that has resulted from the recent minimum wage increases. According to BLS data, the restaurant job losses in the city this year are even steeper and longer-lasting than the job losses during the Great Recession and are the most severe loss of food service jobs since the 2001 recession and the devastating effects the 9/11 terrorist attacks had that year on tourism and restaurant traffic. Compared to the first half of last year when there was an average of about 318,000 restaurant jobs in the city, there were only slightly more than 314,000 restaurant employees during the same period this year, representing a loss of nearly 4,000 food jobs over the last year at a rate of 11 jobs lost on average every day.

The record is clear: Minimum wage hikes come with tradeoffs. Workers lucky enough or skilled enough to be retained see an increase in compensation; others see their hours cut or their jobs disappear. Last October the UW team looking at the effects of the Seattle minimum wage increase released one of their periodic updates. It found,

On net, the minimum wage increase from $9.47 to as much as $13 per hour raised earnings by an average of $8-$12 per week. The entirety of these gains accrued to workers with above-median experience at baseline; less-experienced workers saw no significant change to weekly pay. Approximately one-quarter of the earnings gains can be attributed to experienced workers making up for lost hours in Seattle with work outside the city limits. We associate the minimum wage ordinance with an 8% reduction in job turnover rates as well as a significant reduction in the rate of new entries into the workforce.

New York City could be the “canary in the coal mine” that predicts what happens when politicians engage in “political wage setting” and force significantly higher labor costs on business owners that put jobs at great risk as well as jeopardizing the financial profitability and long-term viability of many restaurants and other small businesses.

Maybe, but NYC is not the first canary.