Pension funding tends to be a classic MEGO (my eyes glaze over) issue, even among policy analysts. As important as it is – and it’s very important for taxpayers and prospective retirees alike – it’s about the future. The challenges of the present generally keep policymakers fully occupied.

But a report by the Rockefeller Institute to the National Conference of State Legislatures makes clear what’s at stake. Here’s the opening slide from the presentation: 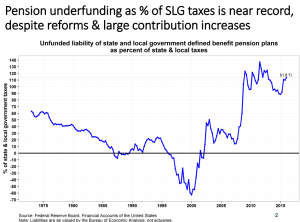 For United States as a whole, S&L govt contributions:

• Annual payment is up $48b after inflation, 2007 to 2015, compared to +$80b for taxes – pension contribs increased 59 cents for every $1 increase in tax revenue. Not much left for other priorities.

• $120-200b below contributions needed for secure funding under generous assumptions; could be even more still; govts hope investment risk-taking will make up the difference

Washington state systems are generally considered better funded than many, but, judging on the basis on what the Rockefeller Institute finds, that seems to be a low bar to clear.

In 2013 the Seattle Times reported,

But that may not be good enough.

An analysis by The Seattle Times suggests that the system’s promised benefits are much bigger, and its real assets smaller, than official numbers indicate.

It matters, and we recommend reading the well-reported article. Something we didn’t know:

Washington’s pension system is one of the largest and most complex in the nation. One of every 14 Washingtonians either receives checks from the state system or is in line to when they retire.

One important factor in maintaining – or establishing – stability: the assumed return on investment of pension funds. The Times reports,

Public pensions such as Washington’s operate under special accounting rules, one of which allows them to assume a long-term rate of return on their investments. Most plans have picked a rate between 7 and 8 percent; all but one of Washington’s plans assume 7.9 percent.

Washington already has begun decoupling investment assumptions from the rate used to discount future obligations: Under a law passed earlier last year, the discount rate will be gradually lowered, to 7.7 percent by 2017.

State actuary Smith had urged lawmakers to bring the rate down even further, to 7.5 percent, but called the new law a good start.

This chart from the Rockefeller report puts the assumption into perspective. 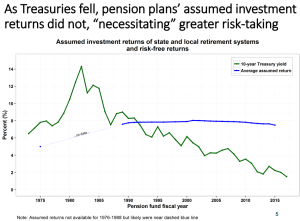 Dropping the assumed return made sense, but the state may have been too conservative. The Rockefeller Institute slides are worth a look.

A June report from the Washington State Actuary adds information on the status of the funds and shows expectations with the lower 7,7 percent rate. This slide shows overall system funding. 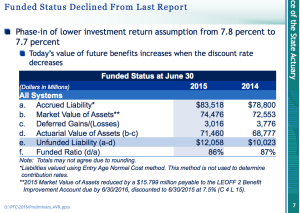 We discussed the rate of return issue in detail in an April 2011 policy brief, Reforming Public Pensions. As we noted then, “using their assumed interest rates, states discount future benefit costs. In short, states are expecting that investment returns will lessen the need for contributions to cover benefits. This assumption downplays the risk that returns will be down in a particular year.” Professors of Finance Robert NovyMarx of the University of Chicago and Joshua Rauh of Northwestern “argue that, commensurate with the level of risk involved, public pensions should use the interest rate on Treasury securities to discount future payments.” Currently, those rates are less than 5 percent.

…Reducing the rate of return assumption is a good step toward measuring pension obligations more accurately.

In our foundation report, we commented on the importance of fiscal sustainability.

Even with the ongoing economic recovery, the state budget will face stress for the foreseeable future as a result of court-mandated increases in basic education funding, increased health care expenses, negotiated public employee compensation increases, and increases in other required state spending.

Given these pressures, special emphasis must be placed on controlling key budget drivers, including health care, labor costs, and debt. Some of the actions lawmakers might explore to increase budget sustainability include fully funding state pensions, creating a defined contribution plan option for state employees, and controlling state debt. (Emphasis added.)

The Rockefeller Institute research is a timely reminder of maintaining a long-term perspective on the consequences of current actions. Even the MEGOs are important.