Washington has benefitted from a vibrant aerospace industry, one of the driving forces in a the state’s continuing economic success. In order to remain competitive with other states vying for aerospace investments and jobs, the Legislature passed tax incentive legislation in 2003, extending it in 2013 to secure 777X production here.

In its annual filings with the state Department of Revenue, required by lawmakers, The Boeing Company discloses how it benefits from the program, also showing how the state benefits. We first wrote about this in 2015, noting

…the investments made by business in this state, including Boeing, provide good jobs for state residents, support education and other essential public services, and help make Washington a state of opportunity and shared prosperity.

In June, the Everett Herald reported the company saved $230 million in taxes while investing $14 billion in the state. That’s still a very good return.

We’re writing about this, again, because the Citizens Commission on Tax Preferences is considering whether to ask lawmakers “to clarify its expectations for the level of aerospace industry employment.” The recommendation comes from the Joint Legislative Audit and Review Commission,” which does tax preference performance review for the Commission.  In August, JLARC concluded,

The aerospace industry remains in Washington, offering wages and benefits above the state average. The preferences improved competitiveness by reducing the industry’s effective tax rate by 50%. Employment has declined from its 2013 level, but it is unclear to what extent the preferences prevented greater job loss.

The Citizens Commission heard comments on the recommendation at a hearing last week. Among the speakers in support of the incentives was Clay Hill, AWB’s government affairs director for tax and fiscal policy for the Association of Washington Business. You can watch his testimony and read a letter explaining that the goals of the tax incentives have been achieved. The thoughtful four-page letter should be read in its entirety. We want to call attention to just a couple of the points Hill makes.

Finally, endorsing the Legislative Auditor’s position could result in negative outcomes by starting to unravel the threads of a deal that was difficult to achieve… was not an oversight to omit an employment baseline. These tax incentives were not passed in a hastily drafted omnibus bill in the final hours of a long session, but instead thoughtfully considered in a special legislative session in November of 2013 called to deal solely with this issue.

Also testifying was Rosemary Brester, CEO of Hobart Machined Products. She and her husband have manufactured parts for every Boeing airplane since the 707 at their small business. As a part of Washington’s rich and growing aerospace ecosystem, their company brings in 15-year-old interns who later go to work at high-paying jobs throughout the state.

A pair of findings from the report show why lawmakers adopted and extended the incentives. Without them, the industry faces an uncompetitive tax burden here; and, aerospace plays an outsize, positive role in the state economy. The graphs below, from the report, make the conclusions clear. 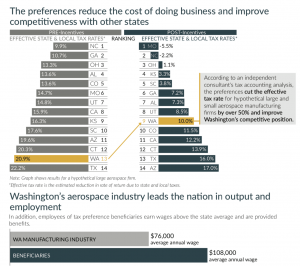 In The Lens, TJ Martinell reported last month on the three scenarios used by JLARC to model the incentives’ impacts.

…three scenarios outlined by JLARC Research Analyst Pete Van Moorsel offered Back To the Future-style hypothetical alternative timelines in which the 2013 tax incentives were not approved.

However, one scenario had Boeing relocating not only its 777X production but all future airplane production outside the state. If that happened, JLARC estimated that by 2040 68,000 aerospace jobs would have lost, along with a whopping 241,600 private sector jobs. Another 54,500 state and local government jobs would have been cut, too.

…Under the most optimistic scenario, Boeing would have kept its 777X production in the state; 200 aerospace jobs would have been due in response to increased production costs, while the additional state revenue would lead to the creation of 3,100 state and local government jobs. Private sector employment connected or affected by the aerospace industry would have grown by 4,700.

Jerry Cornfield covered the hearing for the Everett Herald. He quotes McSherry as saying the incentives “were a deciding factor in siting the 777X in the state.” The story also includes the oft-cited $8.7 billion estimated value of the incentive package, a number that the Washington Research Council calls “mythical.” As important, that 2014 WRC report emphasizes a fact that seems to have eluded critics of the aerospace incentives.

Indeed, it was clear at the time the tax incentive legislation was being debated that Boeing was prepared to move production elsewhere (as they have done with other production in recent years). Certainly, as noted above, Washington’s aerospace tax policy was uncompetitive prior to the original enactment of the incentives…

Focusing on the $8.7 billion number overestimates the costs of aerospace tax incentives for the state and underestimates the impacts of tax policy on business…

More importantly, the tax policies adopted in 2003 were essential to securing the Boe- ing 787 here. Not subsidies, these tax adjustments offset extraordinarily high taxes on commercial airplane manufacturing, enabling Washington to prevail in the intense interstate—and international—competition for industries that can transform regional economies. The policy made sense a decade ago and still does.

Yes. It still does.