Efforts to regulate the gig economy continue, given momentum by California’s sweeping Assembly Bill 5 (AB5). Although AB5 has resulted in negative consequences–presumably unintended–for many freelancers, lawsuits, and a probable counter ballot initiative, the attempts to regulate hiring of freelancers and other independent contractors tempt lawmakers.

In this year’s short legislative session, only one bill aimed at independent contractors is attracting much attention. HB 6276 is drawing significant opposition from cosmetologists.

This is the second year in a row the hairdressers say state senators are putting a target on them, but this time it’s a bit more inadvertently.

“I don’t know why they keep doing this,” said Lori Dickson, owner of Hairbrained Studios in Kennewick.

Senate Bill 6276 is technically trying to prevent people working for apps like Uber or DoorDash from making less than minimum wage, but because of the broad wording of the bill, cosmetologists say it will affect them as well as barbers, tattoo artists, massage therapists and many others.

That “big net” problem will be familiar to those who followed the California AB5 experience. For example, as we wrote earlier,

Freelance writer Nicole Russell explains some of the new law’s impact on her professional community.

Vox Media announced they will be cutting hundreds of freelance writers, mostly those covering sports for the SB Nation site, as the company prepares for Assembly Bill 5 (AB5) to go into effect in California at the start of the new year.

Passed in September, the law requires gig economy workers to be hired as employees with benefits. While the primary sponsor, California Assemblywoman Lorena Gonzalez, had intended to target companies like Uber and DoorDash, the law also forbids freelancers from submitting more than 35 articles per year to the same publication.

AB5 is well intentioned…But AB5 doesn’t account for how the labor market has changed. In an industrial economy, dependence on a single employer made sense, and attaining skills relevant to a single firm proved valuable. Finding other work, after all, could be difficult. But in a knowledge-oriented economy, where technology makes work easier to find and on-the-job skills are more commonly transferable across companies than in the past, independence can suit both employers and employees. Nontraditional work relationships include a host of different arrangements.

She provides additional information at E21. 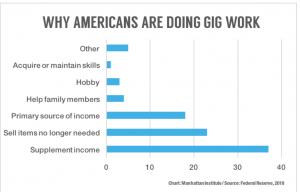 It seems like gig work is everywhere, but the share of Americans doing full-time contract work has been stable over the last 15 years. In fact, most gig workers do it part-time, to supplement their primary income and insure against income shocks. According to the Fed gig work is especially important to low income workers who face more income variability.

Back to the proposed legislation in Olympia, KEPR reports,

The primary sponsor of the bill, Senator Karen Keiser says this will not impact hairdressers. Action News obtained this statement from her:

“I have been hearing from constituents about ways that some tech companies in the gig economy, like Instacart and DoorDash, take advantage of their workers freelance status to avoid paying them a fair wage. This is a growing problem in our modern economy that our minimum wage statute wasn’t designed to address. The goal of this bill is to close that loophole by making sure that freelance workers in the gig economy get paid at least the minimum wage they deserve. This change shouldn’t affect any workers who are already earning the minimum wage or more, whether as an employee or as a freelancer. and I welcome any input about specific technical changes to the bill to that end.”

Cosmetologists say if the bill doesn’t affect them, lawmakers need to make some revisions to Senate Bill 6276, or not pass the bill altogether.

It’s early days. The issue has broad implications for a large segment of a dynamic economy.