A new article in Chief Executive magazine by Joel Kotkin and Mark Schill covers an enormous amount of territory in a handful of informational map graphics and brief discussion. It’s a data-based analysis of job growth in the states: where it’s been and where it’s headed. The news is mixed for Washington, which has been one of the big winners over the past decade. We’re expected to continue to grow, and the tech-centric metro Seattle area is not seen as threatened. But the migration from highly-regulated and heavily-taxed coastal states to more business friendly climes is anticipated to continue.

This pair of maps in particular caught our attention. The track job growth for the past decade and projections for the decade to come.

Washington does well in the backward look. 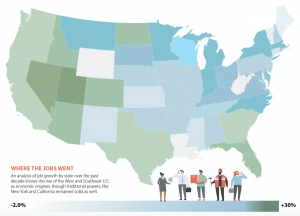 And not so well in the view ahead. 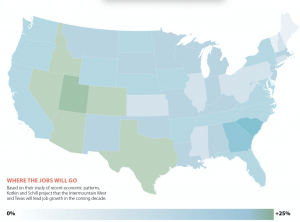 All people may have been created equal—but states are not. Simply put, the big winners are all in the Sunbelt and the Intermountain West. And we project that trend will continue…

At the top of the heap—with growth rates over 20 percent—are, in order, Utah, Nevada, Florida, Texas and Colorado. Their growth has been more than the rate of growth of states like New York and others on the Atlantic seaboard, as well as most Midwestern states. Not surprisingly, these states all boast the highest population growth rates and are home to many of the nation’s fastest growing metros. Austin leads the pack, followed by Orlando. Denver, Dallas and Las Vegas can all be counted among the fastest growing metropolitan regions.

We may be on the cusp of continued weakening for high-tax, highly regulated states—particularly those that lack California’s ideal weather (most of the time) and spectacular topography. New York ranked a respectable 19th over 10 years, but last year it dropped to 22nd. Massachusetts, 16th over the decade, fell to 27th last year. Other traditional leaders, like Illinois, which dropped from 17th worst over 10 years to 4th worst last year and especially Connecticut also are losing momentum, according to last year’s figures.  All have dropped off their 10-year pace.

There’s good news for metro Seattle, though we doubt anyone really enjoys a doppelgänger reference.

Yet as long as the Bay Area—and its Puget Sound doppelganger Seattle—remain the home base for the world’s top tech firms, it’s growth will likely continue as companies staff up with young workers who may not stay for long, but could power the economies.

As history tells us and the authors remind us, state economic fortunes can change quickly, shaped by both policy changes (taxes, regulation), competition, and global/national economic trends (e.g., shifts from goods to services). Generally,

all things being equal, it seems we are continuing to experience a secular shift towards lower tax, less regulated states and away from the coasts. The stronger states, like California and Massachusetts, with their powerful innovation economies and highly educated populace, still might be able to buck the trend, but the economic future seems likely to favor places like Utah, Idaho, Colorado, Tennessee and Texas—now and in the years to come the likely locus of our most dynamic growth.

Of course, no matter how dire the picture for some states right now, things can change—especially over a decade—all you need are the right policies to fulminate growth and opportunity.

Much more in the article. We strongly recommend it.