The economic outlook presented yesterday by the Economic and Revenue Forecast Council cannot be said to have contained minty surprises. The ERFC reports that what most of us have experienced and witnessed in the last few months has been something we’ve not seen before and breathtaking in its scope.

The decline in Washington employment in April was unprecedented in its depth and speed. We have four months of new Washington employment data since the February forecast was released. Total nonfarm payroll employment fell 453,000 (seasonally adjusted) in April and 446,200 in the four-month period. The February forecast expected an increase of 27,500 in January, February, March, and April. Private services-providing sectors lost 359,300 jobs in the four-month period. Construction employment declined by 47,200 jobs and manufacturing declined by 27,700 jobs including the loss of 8,300 aerospace jobs. Government payrolls declined by 11,100 jobs in January, February, March, and April.

The good news: A recovery is expected, with employment gains in 2021.

We expect an 11.0% decline in Washington employment this year compared to the 1.8% increase in the February forecast. We expect above-average growth through the remainder of the forecast as the economy recovers from this deep recession. We expect employment growth to average 4.1% per year in 2021 through 2025 compared to the 0.9% average rate expected in February. Our forecast for nominal personal income growth this year is 2.1%, down from 4.7% in the February forecast. The adverse effects of the recession on personal income this year are mitigated by substantial income support through the CARES Act. Our new forecast for nominal personal income growth in 2021 through 2025 averages 3.8% per year, which is down from the 4.7% rate expected in the February forecast. The effect of the recovery on growth in 2021-25 is offset by the loss of CARES Act support.

Cutting to the conclusion: 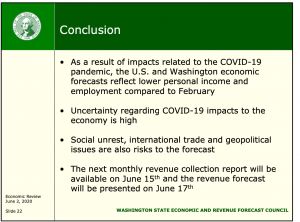 Much more in the report, which will feed into the June 17 revenue forecast.