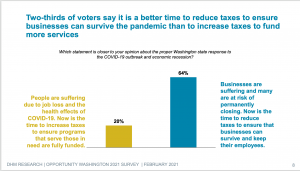 With the week and month of February coming to a close, we wanted to take stock of some good economic news in early 2021. As we noted yesterday, unemployment claims filings are falling. Washington was one of 12 states that saw an increase in last weeks claims, but it was a small increase and the trend is improving.

Claims nationally and in Washington, of course, remain well above pre-pandemic levels. As well, while overall signals show improvement, many sectors – particularly many small business, hospitality firms, and others depending on face-to-face customer interaction – continue to struggle. While the trends are good, the economy is in recovery and there are fragile months ahead.

Still, it’s worth noticing that the economy is  in many ways in much better shape than most anticipated last summer. Some examples:

State revenue growth is strong, continuing to outperform forecasts. Washington ranks second in the nation for revenue growth since the Great Recession.

New orders for durable goods—products designed to last at least three years, such as computers and machinery—increased 3.4% to a seasonally adjusted $256.6 billion in January compared with December, the Commerce Department said Thursday.

It was the ninth straight month of gains and the largest percentage increase since July 2020. Economists surveyed by The Wall Street Journal expected a 1% gain, after an upwardly revised 1.2% increase the previous month.

The Bureau of Economic Analysis reported today that GDP grew at an annual rate of 4.1% in the fourth quarter of 2020.

That bit of good news correlates with this: consumer spending climbed 2.4% last month.

Bouncing back from months of retrenchment, America’s consumers stepped up their spending by a solid 2.4% in January, the sharpest increase in seven months and a sign that the economy may be poised to sustain a recovery from the pandemic recession.

Friday’s report from the Commerce Department also showed that personal incomes, which provide the fuel for spending, jumped 10% last month, the biggest gain in nine months, boosted by cash payments that most Americans received from the government.

In addition, as this comment on the reduction in national jobless claims points out, vaccinations are boosting confidence and re-hires.

“It was a big drop, but I think the trend is going to continue because people are going out and spending more,” said Michelle Holder, a Ph.D. labor economist at John Jay College in New York. The decrease in jobless applications is consistent with vaccination efforts giving Americans confidence the pandemic will end and signs that hiring is picking up, she said.

Economic indicators are not only moving in the right direction now, but there’s every indication that they will continue to do so. Public policy, however, so important to mitigating the damage of the COVID recession, can also stall the recovery by increasing the burdens on business.

As we’ve reported,  the state has no budget shortfall. There’s no need to raise taxes at this time. And there’s every reason to believe that tax increases would put the brakes on what appears to be a strong economic recovery. As the chart at the top of this post shows, voters agree.