As Paul Roberts writes in The Seattle Times, that “V-shaped recovery” we all hoped for weeks ago now appears highly unlikely. Instead, we’re looking at a long slow slog.

By almost every indicator — from lost jobs and shuttered businesses to manufacturing slowdowns and falling tax revenues — the economic damage from the pandemic has been so much worse than expected that some economists are now drawing comparisons, not to earlier recessions, but to natural disasters, whose economic impacts can be particularly hard to overcome.

Indeed, forecasts now suggest a recovery that will be anything but V-shaped. The Congressional Budget Office predicts that the national economy, which shrank by an annualized rate of 4.8% in the first quarter, will shrink by an astonishing 40% in the second.

That sets the stage for a recovery, in Washington and elsewhere, that is likely to stretch well into 2021 or beyond and have far-reaching impacts.

Read the story for more detail. This graph shows that Seattle has been hit a bit harder than the average. 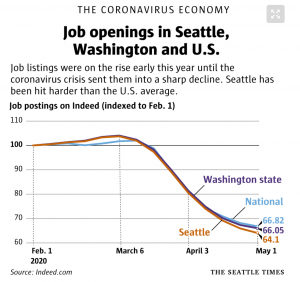 A similar long-slog prediction is discussed in The Wall Street Journal.

Until recently, many policy makers and corporate executives were hoping for a V-shaped economic recovery from the coronavirus pandemic: a short, sharp collapse followed by a bounce back to pre-virus levels of activity.

Now, however, they expect a “swoosh” recovery.

Named after the Nike logo, it predicts a large drop followed by a painfully slow recovery, with many Western economies, including the U.S. and Europe, not back to 2019 levels of output until late next year—or beyond.

Again, read the whole thing for details and see also this discussion of permanent factory closures caused by the pandemic. Tax collections are tanking as the economy remains in lockdown, of course, and it is all-but-certain that an unlocked economy won’t result in a quick recovery.

So The Seattle Times editorial board writes that it’s time for state budget writers to begin the tough budget-cutting a $7 billion revenue shortfall will require. The editorial says,

A special legislative session is needed to make bolder moves than the modest trims Inslee made in April. Using vetoes, he cut $235 million from the current budget and reduced spending by $210 million in the next biennial budget.

For context, the 2020 state operating and capital budget is $57.9 billion. Lerch projects $3.8 billion will be lost in the current budget cycle because of economic measures taken to slow the coronavirus spread. In the 2021-2023 biennium, revenue would be $3.27 billion less than expected.

The editorial reviews the prospects for a slow recovery. It also cites the rapid growth in state spending in recent years, including that required to satisfy the constitutional requirement for full funding of basic education. Calling for more transparent and sustainable collective bargaining, the editorial board further says a special session should address spending reductions through the 2021-2023 budget cycle.

Politicians would likely prefer to have firmer data on revenue declines to provide cover for painful budget decisions. But they don’t have the luxury of being able to wait for a complete picture to emerge; with the shutdown continuing into June, the revenue picture won’t be clear for months.

The piece concludes with a call for greater public involvement in the budget process.