The September revenue forecast cited improved consumer confidence and growing national and state economies. Employment is up. And, as the chart below shows, revenue collections are way up. 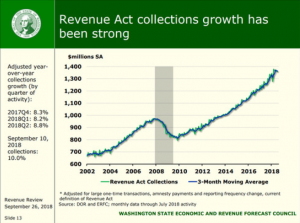 Trade concerns continue to cause business owners and economists to hedge their bets. The Associated Press reports,

The economy should grow at a healthy pace this year and next, though the Trump administration’s trade policy will likely act as a drag, a group of business economists said.

Growth should reach 2.9 percent this year, according to a survey of 51 economists by the National Association for Business Economics, released Monday. That would be up from just 2.3 percent in 2017. And growth is forecast to be 2.7 percent in 2019, the survey found.

Still, worries over trade policy have darkened the outlook for many. Nearly 80 percent of the economists surveyed cut their growth forecasts for next year by up to one-half a percentage point, the NABE said, because of trade concerns.

The AP also reports that small business owners are cautious.

Although the economy is strong and consumers are optimistic, many small business owners are holding fast to their cautious approach to expansion…

Despite an economy that’s generally doing well, small business owners are staying conservative, the stance they’ve held since the Great Recession. That’s the finding of a third-quarter survey of companies by researchers at Pepperdine University’s Graziadio School of Business and Management and Dun & Bradstreet Corp.

Some owners have said they’re concerned about the impact of the Trump administration’s trade tariffs on goods imported from China and Europe, and the retaliatory tariffs countries have imposed on U.S. goods. The drop in exports economists expect would be due in part to the fact that companies and farmers rushed to ship their products before U.S. tariffs took effect, and exports will now fall back to more normal levels.

Meanwhile, U.S. importers, manufacturers and retailers are concerned that their profits will be hurt by tariffs on raw materials and finished products from other countries.

The new United States-Mexico-Canada Agreement (we agree with those who say the name won’t stick; it’ll be NAFTA 2.0) is likely a step forward, but China and Europe remain major concerns.

The Lens also reports on forecasters’ projections and concerns, including comments made at the recent AWB Policy Summit.