Editorials in The Herald (Everett) and The Columbian point out one of the major decisions facing lawmakers in the coming year: What to do about the declining productivity of the gas tax. We wrote about our state’s pay-per-mile experiment in late 2017. The pilot project is now over, as the Road Use Charge Steering Committee reports.

The Columbian editorial starts out,

Washington needs to come up with an alternative to its gas tax.

That is the easy part; with more fuel-efficient vehicles and an increase in electric and hybrid cars, the state’s gas tax is providing less and less revenue for building and maintaining roads. The difficulty comes in trying to devise a proposal to phase out the current tax. That will be the task facing the Washington Transportation Commission when it votes in December for a plan to send to next year’s Legislature.

As the editorial points out, our state’s 49.5 cents per gallon gas tax is third highest in the nation. The Tax Foundation map below shows where we stand. 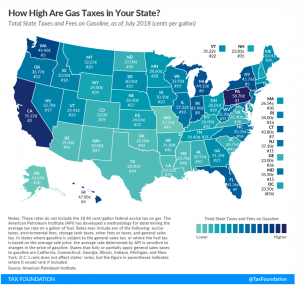 The editorial identifies transition challenges on the road to a pay-per-mile system.

There are concerns about a pay-per-mile system. One of them is the method for recording mileage without unduly invading privacy. Many people are understandably leery about using a GPS device that tracks their location. Other issues: Paying for miles driven could inequitably hit residents in rural areas or low-income people who live far from work because of housing costs; and out-of-state driving could result in being taxed twice.

On top of that, implementing a pay-per-mile system would present some problems. State Sen. Rebecca Saldana, D-Seattle and vice chairwoman of the Senate Transportation Committee, said that such a format would have to be phased in over 10 to 25 years. This is because the state has issued bonds to pay for transportation projects and those bonds would have to be paid off through gas-tax revenue before the tax could be eliminated.

True enough. But, as the Herald editorial says, doing nothing poses significant problems as well.

There’s growing certainty, however, that what the state collects from its gas tax in coming years won’t be sufficient to provide the greatest share of revenue for the state’s highways, roads, bridges, ferries and other transportation infrastructure.

As most vehicles become more fuel-efficient and more drivers switch to hybrid-electric and full-electric vehicles, less gasoline and diesel is being consumed and with that decline — even at 49.4 cents a gallon, the nation’s third highest gas tax — revenue to replace and maintain that infrastructure is diminishing.

The editorial reports drivers participating in the pilot project grew increasingly comfortable with the road use charge.

Regarding acceptance of the switch, however, the recently completed report included data from surveys of its participants, taken at three points during the 2018 pilot program. Among the surveys’ findings, many of those participating showed increasing acceptance and support as the pilot progressed.

At the start, just over half (51 percent), expressed support for the mileage fee. That figure increased to 65 percent support at the midway point and 72 percent at the conclusion.

It’s far from certain that the short 2020 legislative session will tackle the issue. As the Herald editorial says,

The Transportation Commission will make its own recommendations to lawmakers, but as the Legislature begins to gauge whether the public will back a replacement of the gas tax, the growing acceptance shown in the pilot project’s surveys deserves more than a passing glance.

Acceptance by the state’s drivers will largely depend on full details from transportation officials and lawmakers on how and when a swap of the gas tax for a per-mile charge would be made and what that fee would look like.

But a decision can’t wait long; the gas tax may soon be running on empty.