So far, this has been a week for education funding news. We linked earlier today to some articles that put the challenge in context. And, we’ve written previously about the governor’s proposed budget and reactions to it.

Today MYNorthwest.com reports that Tacoma school administrator Erin Jones, unsuccessful in her recent bid to be elected Superintendent of Public Instruction, sees a tough funding session ahead. Of the governor’s budget, she says,

“The reality is that you got to find something that both Democrats and Republicans can agree to,” Jones said. “Every proposal that (Inslee) has made is something that has already been proposed either last year or the year before. Not one of them passed the last time around. I think they are going to have to get into a room and talk about something new that both parties can agree to.”

And while a major element in the current debate involves compensation,

“I think when the general public hears we are going to pay the adults working in education more,” she added. “That’s not enough to make anyone want to take on another tax.”

In our earlier post on education, we missed this story in The Daily News.

Fact one: Over the past decade, state K-12 education spending has increased 51 percent in Washington, from $13.75 billion in the 2005-07 biennium to $21 billion currently. Most of the increase occurred in the last four years.

Fact two: Per-student spending in Washington rose 21 percent over the last six years, from $9,945 to $12,052. That’s about $1,300 more than the $10,700 national average, though well short of what national leaders like New York and Massachusetts spend.

The graph accompanying the story makes the recent progress clear. 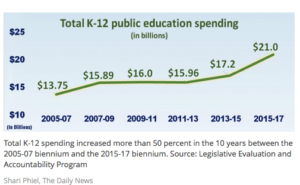 Buried in all the numbers are challenges in what’s being taught. Crosscut describes a troubling shortfall in computer science education.

Washington state, one of the nation’s foremost tech hubs, has historically only offered computer science as an elective in public schools — if it’s offered at all. Currently, only one in 10 schools in the state offers courses that teach kids advanced computer science skills.

The tides may be turning, however. Attention to computer science education has increased lately, due in part to the overwhelming skills gap between Washington’s university graduates and available jobs in the tech industry. Lawmakers are realizing that, in order to remedy this problem, schools need to give all kids an equal shot at learning STEM (science, technology, engineering and math) skills.

It’s a good article and useful reminder that, while funding remains a top priority, organizing the curriculum, finding educators equipped to train the next generation for the opportunities ahead, and making sure everyone gets the chance to succeed are policy issues that go beyond the funding formula.