A new report from the Fordham Institute examines regional variation in the education premium, the additional earnings accruing to workers with additional education. The research, conducted by John Winters, an Iowa State University economist, finds,

…nationally, bachelor’s holders strongly out-earn workers with less education. Yet there’s significant variation across the country, with college earnings premiums that are substantially greater in large cities and urbanized areas, and smallest in rural America.

The report covers a lot of territory and we recommend it to those interested in a deep look at how location and education interact. In the foreword to the research report, Amber Northern and Mike Petrilli draw a link to the pandemic’s effect on the economy.

The current crisis thus yields another cautionary tale about the perils of entering the workforce with nothing but a high school diploma. But does it also mean that everyone needs a four-year college degree? That those of us involved in K–12 education should tell all our young charges they would be wise to go “to and through” college? And that we should build our high schools around that singular mission?

The answer, of course, is no. In the real world, young people need not make a binary choice between four-year college or no college. In between are multiple options, including all manner of industry credentials, certificates, and two-year degrees, any of which may provide buffering—economic and otherwise—against hardship during troubled times and open various career doors during better times.

As we’ve noted often, most recently here last month,Washington is falling far short of meeting a goal we endorsed in 2017: By the high school class of 2030, 70% of Washington students will go on to attain a postsecondary credential by age 26.  The Washington Roundtable and Partnership for Learning, in “The Path to 70% Credential Attainment” report,

As these two charts from the Fordham report show, the education premium is high in Washington. The top chart shows the national data; the chart below it is for Washington. 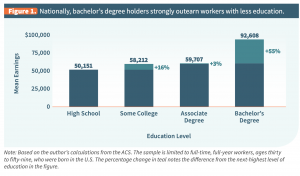 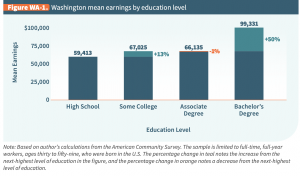 In an essay discussing the report, Northern and Petrilli write,

The coronavirus won’t be with us forever. We will defeat it. Still, 2020 will long be remembered as the year when lives were upended—some tragically lost, some mercifully recovered, and some merely inconvenienced.

But let’s also remember that those facing some of the greatest challenges amid the pandemic and economic downturn are the non-college-educated service sector workers in large metro areas who are on the wrong side of the largest college earnings premiums and who face exorbitant housing costs. They are the ones most likely to be out of work or working on the front lines at the risk of getting sick.

Many of our colleagues in the education-reform movement have internalized these realities, considering how many of us live in the coastal, “creative class” meccas ourselves, which also means we see the hardship faced by young people without four-year degrees up close and personal. So the “college for all” impulse is understandable. But let’s not forget that in much of America, there are highways to middle-income lifestyles whose routes don’t pass through leafy university campuses. Our high schools should take this fact into account and offer students quality pathways into apprenticeships and technical postsecondary programs, not just academic ones.

Agreed. There’s a lot to learn in the report, which both raises and answers many question of heightened importance as we consider the possible restructuring of a post-pandemic economy. Clearly, however, the report reinforces the importance of postsecondary training and education.