Changes in employment demand – job polarization – has played a role in the growth of urban areas and the wage premium realized by college-educated workers. That’s our interpretation of a provocative article by Josh Lehner, an economist with the Oregon Office of Economic Analysis. Lehner draws on research by MIT economist David Autor, whose article Work of the Past, Work of the Future furthers understanding of the workforce.

Here’s the abstract from Autor’s piece.

Urban U.S. labor markets today are vastly more educated and skill-intensive than they were five decades ago. Yet, urban non-college workers currently perform substantially less skilled work than in prior decades. This deskilling reflects the joint effects of automation and international trade, which have eliminated the bulk of non-college production, administrative support, and clerical jobs, yielding a disproportionate polar- ization of urban labor markets. The unwinding of the urban non-college occupational skill gradient has, I argue, abetted a secular fall in real non-college wages by: (1) shunting non-college workers out of specialized middle-skill occupations into low-wage occupations that require only generic skills; (2) diminishing the set of non-college work- ers that hold middle-skill jobs in high-wage cities; and (3) attenuating, to a startling degree, the steep urban wage premium for non-college workers that prevailed in earlier decades. Changes in the nature of work—many of which are technological in origin— have been more disruptive and less beneficial for non-college than college workers.

Those interested in addressing challenges of wage disparities, opportunity gaps, and urban-rural dynamics will appreciate the article. Autor concludes the dense discussion by writing,

During the transition Autor sees, we’ll again emphasize the importance of postsecondary education – the credential is essential – to expanding opportunities for young people wanting to enjoy career success.

Lehner has produced a Pacific Northwest chart showing the changes in the urban wage premium. 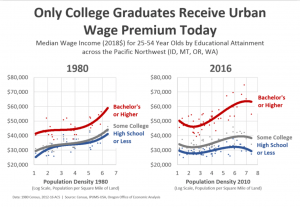 The problem with job polarization is not just the loss of a middle-wage job, it’s when that worker is unable to land a similar paying job in its place. Autor’s research finds that “almost all occupational change among non-college workers reflects a movement from the middle toward the bottom of the occupational distribution.” This is in-line with what we found HERE and HERE in Oregon as well. These adjustments are disheartening as most Oregonians either end up taking a low-wage job or drop out the labor force entirely (1/3 of women, up to 2/3 of men). Autor writes that this process depresses wages in two ways. First, by taking a low-wage job, a worker simply earns less. Second, the labor pool is larger and as the supply of potential workers outstrips demand, the price (wage) falls.

The result is that workers today without a college degree perform the same tasks in urban areas as they do in more rural areas. As such, they are paid the same relative wages. A high school graduate working in Pendleton or Sequim earns the same as their counterpart in Portland or Seattle. There is no longer an urban wage premium for workers without a college degree. All of this before housing and the cost of living are taken into account.

Obviously we, as a society, have know about some of these dynamics for a long time. What is new is how Autor combines these insights to look at how job polarization and geography meet, overlap, and intertwine. What he finds is highly informative and can largely explain big picture trends in recent decades. As such, the research is also depressing. The good news is that a strong economy does work wonders, even if does not cure all ills. Job polarization is most evident in recession. During expansions, middle-wage jobs do grow, particularly those driven by population gains, but they do not fully regain their share of the labor market.

And as the economy changes, our education system must adapt to prepare students for the emerging opportunities.