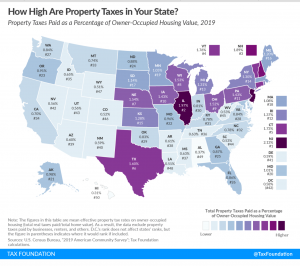 Property taxes seem to have somewhat diminished as a hot button tax policy issue in recent years, but they always remain a matter of some interest, particularly for homeowners in a hot real estate market. So the annual Tax Foundation comparison of effective tax rates, shown in the map at the top of this post, helps puts the tax burden in our state in perspective. (We acknowledge that within the state there’s also wide variation in the property tax burden.)

As the rankings show, Washington is close to the median state, No. 27 with an effective tax rate of 0.84%. That’s

This is the average amount of residential property taxes actually paid, expressed as a percentage of home value.

The Tax Foundation notes the myriad ways in which state and local governments approach property taxation.

Governments tax real property in a variety of ways: some impose a rate or a millage—the amount of tax per thousand dollars of value—on the fair market value of the property, while others impose it on some percentage (the assessment ratio) of the market value. While values are often determined by comparable sales, jurisdictions also vary in how they calculate assessed values. While property taxes tend to be imposed at the local level, the basic framework for how they are imposed is typically set by state law.

Some states have equalization requirements, ensuring uniformity across the state. Sometimes property tax limitations exist which restrict the degree to which one’s property taxes can rise in a given year, and sometimes rate adjustments are mandated after assessments to ensure uniformity or maintenance of revenues. Abatements are often available to certain taxpayers, like veterans or senior citizens. And of course, property tax rates are set by political subdivisions at a variety of levels: not only by cities and counties, but often also by school boards, fire departments, and utility commissions.

And the wide range of ETRs.

n calendar year 2019 (the most recent data available), New Jersey had the highest effective rate on owner-occupied property at 2.13 percent, followed by Illinois (1.97 percent) and New Hampshire (1.89 percent). Hawaii was at the other end of the spectrum with the lowest effective rate of 0.31 percent, followed closely by Alabama (0.37 percent) and Louisiana and Wyoming (both at 0.51 percent).

As we said, Washington falls close to the median, and well below the top states.