A new poll released by the Association of Washington Business continues a theme: Things have gotten off track. Employers face problems stemming from tax and regulatory burdens and a lack of qualified workers. 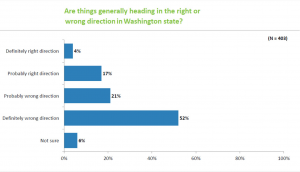 “The majority of employers that support Washington’s economy and quality of life say our state is simply headed in the wrong direction,” AWB President Kris Johnson said. “Last session, we asked legislators to ‘do no harm’ to employers who were struggling to survive the pandemic. Lawmakers ended up passing a capital gains tax and other legislation that will raise costs for employers. This year, as they enter a new legislative session with more than $8 billion in reserve, legislators have another opportunity to be champions for the economy and provide some help for employers, particularly small businesses.”

For more detail, read at the link.

The results mirror those of the Elway/Crosscut and Opportunity Washington polls we’ve recently reported on.

Lawmakers this session have the opportunity to provide some relief.

Here’s a link to coverage of the session that began yesterday.

Much more money will be in play in 2022 than is typical of even-year legislative sessions, which is when lawmakers generally make smaller adjustments to the two-year budget they approved the year before.

Inslee, for his part, is proposing to spend $626 million this year on efforts to reduce greenhouse gas emissions, as well as $800 million to help combat homelessness.

Next: New WA long-term care tax delayed so Legislature can fix it

Legislators have their own ideas. Last week, House Minority Leader J.T. Wilcox, R-Yelm, said he would like to spend the state’s financial windfall on transportation infrastructure, as well as reducing taxes.

“I, like a lot of us, thought we’d be looking at a recession,” House Minority Leader J.T. Wilcox said Thursday at the annual Associated Press Legislative Preview. But a combination of federal money for COVID-19 pandemic relief and a rebounding economy means lawmakers have plenty of options.

“We should spend those (funds) on our transportation infrastructure,” Wilcox said. “We all depend on goods and services that move around the state.”

Republicans, consigned to the minority, continue to assail many Democratic policies. They cite problems in new policing laws that prompted law enforcement to stop responding to some service calls and troubles with the long-term care program as two symptoms of single-party rule in Olympia.

And they’re continuing their call for tax reductions as state coffers continue to fill.

“Right now, the people of Washington state aren’t saying ‘Hey, we need more help,’ ” said Senate Minority Leader John Braun, R-Centralia. “They’re saying ‘Get out of our way and stop taking the funds we have.’ They’re faced with inflationary pressures.”

Republicans have called for tax relief, but while releasing his budget last month, Inslee said he didn’t know whether he’d support a sales tax cut if the Legislature passed it.

Democratic leaders have not ruled out a tax break, but Senate Majority Leader Andy Billig, D-Spokane, said Thursday they should prioritize making “strategic investments” statewide. House Speaker Laurie Jinkins, D-Tacoma, agreed, noting that most of the additional money remains one-time. One thing they may look at is expanding the Working Families Tax Credit.

There’s a lot on the table. Employers’ concerns should be a top priority.