The U.S. added 250,000 jobs in October, capping a week’s worth of good economic news. The Wall Street Journal reports,

Hiring accelerated in October and the unemployment rate held at a 49-year low, signs of a strengthening labor market that delivered U.S. workers the best pay raises in nearly a decade.

A pair of graphs from the WSJ nicely illustrate the effects of supply and demand. As unemployment rates fell, wages rose (albeit more slowly than many expected or desired). 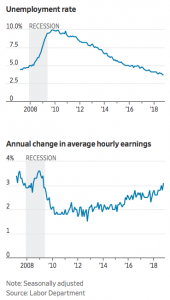 With relatively few unemployed Americans looking for work, employers are increasingly having to bid up wages to poach workers from other employers. That has been happening for several years for higher-skilled workers such as engineers and welders, but now it is occurring for relatively lower-skilled jobs such as warehouse workers and home-care aides.

CNBC also reports on the jobs numbers, including good news for manufacturers.

Job growth blew past expectations in October and year-over-year wage gains jumped past 3 percent for the first time since the Great Recession, the Labor Department reported Friday…

Manufacturing contributed 32,000, thanks to a gain in durable goods and in particular transportation equipment, which added 10,000.

Yesterday, we wrote the strong economy most benefits the prepared:

Taken together, the growth in compensation and productivity plus the heightened demand for qualified workers underscore an unprecedented expansion of economic opportunity. As we’ve reported before, citing the work of the Washington Roundtable, Association of Washington Business, and Washington Research Council, to capitalize on these opportunities workers will need training and education beyond a high school diploma. That can include apprenticeships, professional and trade certifications, college coursework or four-year degrees. But, in the words of the Roundtable, “the credential is essential.”

Michael R. Strain, director of economic policy studies and resident scholar at the American Enterprise Institute, writes in Bloomberg that the economy is even boosting gains for low-skilled workers. That’s true. During the downturn, low-skilled workers were the first to fall out of the workforce; employers were able to be more selective and retained employees with the most skills and highest productivity. So, the low-skilled had more ground to make up in the recovery and are, therefore, now showing more rapid gains. Yet, as he writes, it pays to have skills and credentials.

Workers in other education groups are also outperforming their historical rates of joblessness, but not as dramatically as high-school dropouts are. The long-term average unemployment rate for workers with a bachelor’s degree or higher, for example, is 2.8 percent, while their 2018 average is 2.1 percent.

As we wrote in 2017, education past high school pays off for individuals and for society.

Postsecondary education pays off for individuals. In 2015, median annual earnings for a full-time worker with a bachelor’s degree were 66 percent higher than those of a worker with only a high school diploma.6

The implications of increasing postsecondary attainment for society are also dramatic. BCG estimates that in a typical high school cohort of 81,000 students, 70 percent postsecondary attainment means 31,000 more students will earn a credential each year. Each will earn nearly $1 million more over his or her lifetime. Collectively, their success will reduce unemployment by a third and poverty by nearly half, saving our state billions of dollars a year in social spending.

We repeat: It’s been a long time since the jobs market looked this good.