The state Employment Security Department yesterday provided information on the wave of fraudulent unemployment benefit claims filed in the spring, as well as “significant progress” on clearing the department’s claims backlog.

The Washington Employment Security Department (ESD) announced on Monday it has resolved all claims included in the Operation 100% initiative. These include all individuals who had applied between March 8 and June 18 who had yet to receive payment and needed ESD to take action to resolve their claims.

“Getting benefits to all eligible Washingtonians has been, and continues to be, our agency’s top priority in this crisis,” said ESD Commissioner Suzi LeVine. “As we turn the page on Operation 100%, more than 81,500 individuals who had applied by mid-June and not received payment now have resolution on their claims. While clearing this initial backlog represents significant progress, and more than 900,000 individuals have received benefits since the crisis began, we know we still have a lot more work to do and a lot of trust to be regained as we move into the next phase of our response. There are still those who have applied since mid-June or had issues set on their weekly claims and need resolution. We will leverage the progress made and lessons learned in Operation 100% to help those individuals and resolve all claims much faster moving forward.”

Regarding the UI fraud, this slide from the department’s presentation summarizes the fraudulent claims and losses. 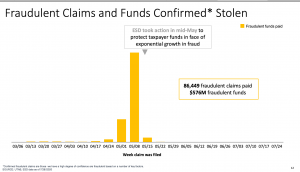 For the first time, agency officials shared a precise estimate for the number of bogus claims that criminals filed and the state inadvertently paid benefits on: 86,449. They also gave the more specific dollar amount of $576 million…

An ESD timeline shows that most of the fraudulent claims were filed in early May. But it also shows that criminals were testing Washington’s unemployment system with a smaller number of claims in the weeks after the first big pandemic layoffs in early March.

The department has recovered some of the money.

Levine said the agency has since recovered $340 million in stolen funds. That’s slightly less than earlier recovery estimates and reflects the fact that $33 million of the funds returned to ESD by banks were actually legitimate payments to genuine claimants, and have been sent back out or will soon be, LeVine said.