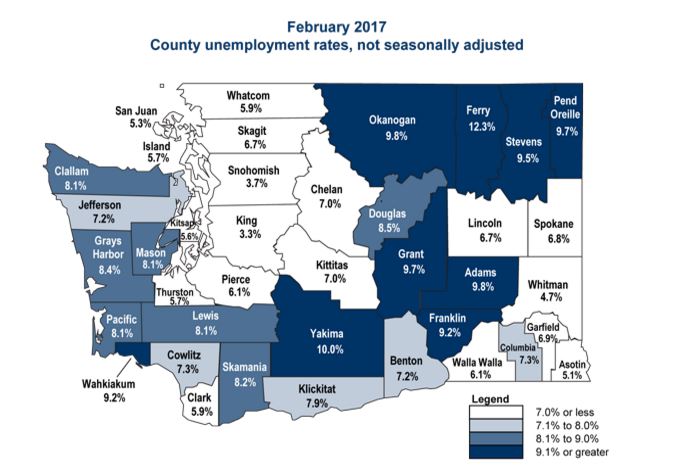 We’ve noted the trend before. It’s not unique to our state. And it has consequences for state and national politics and policy.

The Daily Yonder takes a look at national county employment patterns and reports,

Rural America lost jobs in 2016, according to a Daily Yonder analysis of federal jobs data, as the growth in employment continued to concentrate in the nation’s largest cities.

Eight out of 10 jobs created in 2016 were in the 51 metropolitan areas of a million people or more. These giant urban areas gained 1.2 million jobs between January 2016 and January of this year, according to the Bureau of Labor Statistics. In rural counties, there are nearly 90,000 fewer jobs this January than in the same month a year ago.

The slow growth, or even decline, in rural jobs is the continuing story of the post-recession economy. Everybody lost jobs in the crash of 2008. But since the recovery began the growth in jobs has centered in the nation’s largest cities.

It’s vital that policy makers recognize that public policies – tax, regulatory, transportation and education – fall differently on communities still struggling to climb out of the recession. Our vision – spreading the culture of opportunity and shared prosperity to all corners of the state – comes with a roadmap outlining ways to achieve the goal. And, as the latest data show, the state’s not there yet.