With Election Day coming and voters filling out their ballots, the I-976 car tabs initiative is receiving substantial attention. As it should. Should I-976, state and local governments face a transportation crisis that would both undo recent progress and make future progress much more difficult to realize.

We’ve written about the measure several times, including devoting one of our weekly newsletters to it. We’ve linked to commentary by business, labor and environmental leaders, who point out “I-976 threatens our economy and our environment. It is far too costly” to our future. Independent analysts confirm “I-976 would significantly disrupt planned transportation projects.”

The Association of Washington Business, which opposes I-976, writes this week,

Voters will reject or approve Initiative 976 in the November election, and the consequences will matter greatly for the state and local transportation agencies that rely on vehicle fees and car tab taxes to maintain highways, bridges and fund public transportation, among other priorities.

Local governments could lose about $2.3 billion in transportation funding over six years, and state projects could lose $1.9 billion, a state analysis shows...

“Now more than ever, Washington needs to invest in projects that get people to work swiftly, children to school safely and goods to market efficiently,” AWB President Kris Johnson said. “If it’s approved, I-976 will remove billions from the transportation budget at a time when we can least afford it, jeopardizing critical projects throughout the state.”

The Seattle Times reports on how cities are preparing for a worst-case scenarios.

If voters approve Initiative 976 to cut car-tab fees across Washington, opponents say the state Legislature could be sent into havoc trying to backfill funding cuts, setting off a “Hunger Games-style” competition between agencies.

Backers of the initiative say: So what?

“So. what?” is a cost-free fall back for those who leave others to deal with the wreckage. The ST graphic below shows the magnitude of the projected revenue losses. 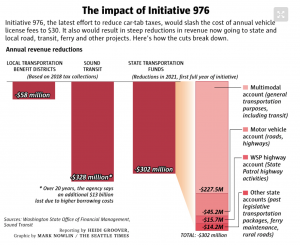 Prominent lawmakers are quoted on how state government would likely respond.

Local governments could also lose about $58 million a year from local car-tab fees and look to the Legislature for help.

“I would probably just do at first a straight across [cut],” said Sen. Steve Hobbs, D-Lake Stevens, who chairs the Senate Transportation Committee. “Then, Hunger Games-style, the agencies or departments would have to defend what they’ve got.”

Serious talk about new revenue is unlikely in a short 60-day session that would start in January, immediately following an anti-tax vote, some lawmakers said.

Spending from the rainy-day fund or operating budget “is forcing recessionary policies and recessionary cuts at a time when the state is not facing a recession,” said budget writer Sen. Christine Rolfes, D-Bainbridge Island, “and will put us in much weaker place when we actually have a national recession.”