After yesterday’s post on the urban-rural divide and its role in the midterm elections (here and across the nation), we wanted to point to a more granular analysis by FiveThirtyEight analyst Geoffrey Skelley. 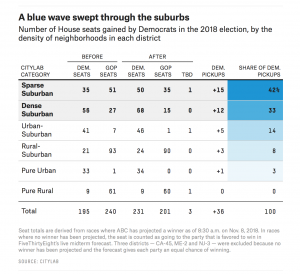 The blue suburban tilt will be familiar to Washington voters, particularly in the metro Puget Sound region.

The two categories we’re most interested in are “Sparse Suburban” and “Dense Suburban.” “Sparse Suburban” covers districts in outer-ring suburbs at the edge of major metropolitan areas, like the Virginia 10th, which sits outside of Washington, D.C. “Dense Suburban” districts, on the other hand, are those where people are packed in more tightly in mostly inner-ring suburbs and some urban areas, like the California 25th, which falls in the Los Angeles metro area. And as the table below shows, Democrats are poised for a net gain of 27 seats from these two categories, which is four more than they needed to gain a majority. In other words, 75 percent of Democrats’ gains came from these predominantly suburban districts. (Citations omitted.)