As the year ended, Forbes magazine released its “Best States for Business 2019” rankings. Washington did well, coming in at No. 8. Here’s the Washington snapshot. 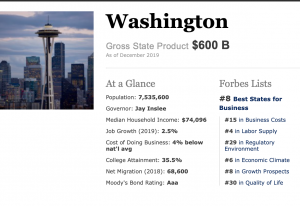 As the table shows, Washington gets its best marks for labor supply, economic climate and growth prospects. The lowest scores are for regulatory environment and quality of life. The metrics matter. On that relatively low quality of life measure, for example:

Quality of life takes into account cost of living via Emsi, school test performance via the Department of Education and crime rates from the FBI. We factored in the mean temperature in the state as a proxy for the weather and the number of top-ranked four-year colleges in the state from Forbes’ annual college rankings. We considered the culture and recreational opportunities in the state based on an index created by Bert Sperling as part of our annual Best Places for Business and Careers list. Other factors include commute times from the U.S. Census and the United Health Foundation’s America’s Health Rankings.

And the high marks for economic climate reflect past performance. As we know, Washington has enjoyed a long run of strong economic growth.

The economic climate category gauges job, income and gross state product growth as well as average unemployment during the past five years. Other metrics include the average 2019 unemployment rate and the number of the 1,000 biggest public and private companies by revenue headquartered in the state.

Forbes has rated the business climates of the 50 states since 2006, with only North Carolina (three times), Utah (six times) and Virginia (five times) ever claiming the top spot. Texas has ranked second twice before, including on the inaugural list, and last year it took third place.

We, of course, are somewhat partial to the Opportunity Washington Scorecard.