The latest monthly update from the state Economic and Revenue Forecast Council show that revenue collections remain above projections, even after adjusting for a one-time event..

Major General Fund-State (GF-S) revenue collections for the October 11 – November 10, 2019 collection period came in $90.3 million (4.9%) above the September forecast. More than half of this month’s surplus was due to transfers of unclaimed property to the GF-S, which were $46.6 million higher than forecasted. Without the extra funds, collections would have been $43.7 million (2.4%) higher than forecasted.

As the ERFC chart below shows, revenues have continued a steady climb. 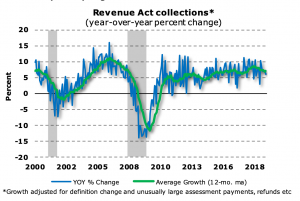 Washington exports declined sharply over the year for the second consecutive quarter. Year-over-year exports decreased 33.4% in the third quarter of 2019 following a 27.6% decline in the second quarter. The large declines were mostly because of transportation equipment exports (mostly Boeing planes) which fell 41.9% in the second quarter and 53.1% in the thirquarter (see figure). Boeing suspended deliveries of the 737 Max in March, which clearly affected second and third quarter exports. However, third quarter exports of agricultural products also declined 8.3% over the year and exports of all other commodities (mostly manufacturing) declined 8.2% over the year. 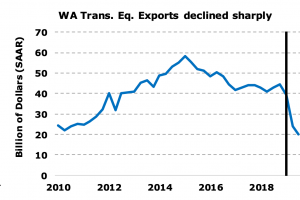 The November revenue forecast will be released tomorrow at 10:00.