Data on population growth from 2010 to 2015 show a continuing concentration of people in metropolitan areas, especially in the large areas with over a million people, where presumably traditional values are most challenged.  I show an amazing table, in which I have disaggregated population change by type of settlement, from the million-metro areas to the purely rural counties, comparing growth amounts and rates, plus noting how these areas actually voted in 2012.

That makes California the seventh state since 2002 to repeal family cap rules enacted by 22 states during the 1990s and early 2000s, according to the Urban Institute, which has closely tracked the issue…

The move to repeal family payment caps coincides with research that indicates the laws don’t reduce birthrates among those receiving Temporary Assistance for Needy Families (TANF). Researchers also have found that the rules are harmful to children, cause lifelong damage to their learning and development, and increase the “deep poverty rate” of children by 13 percent.

The University of Washington was granted 93 patents last year, ranking 19th on a list of universities around the world.

Critics of automation are quick to cite a 2013 University of Oxford study which predicts that over the course of the next one to two decades, nearly fifty percent of jobs may be automated. Without context, those numbers certainly could trigger anxiety – and in fact they have. Thankfully, a new OECD-commissioned study has provided some much needed context.

Its authors argue that the 2013 study may have overestimated the risk for automation of jobs as its underlying assumption was “that whole occupations rather than single job-tasks are automated by technology.” Overall, when accounting for the “heterogeneity of workers’ tasks within occupations,” the new study finds that on average across the 21 OECD countries, only 9% of jobs are automatable.

People may notice a small, unmanned helicopter flying over Washington vineyards this summer, but don’t worry. Doing work for science, it is fully approved by the Federal Aviation AdministratioWSU professor Lav Khot prepares to fly the 8-bladed octo-copter over a vineyard to measure how effectively a new irrigation method gets water to the vines.

The drone, or unmanned aerial system (UAS), is an eight-rotor “octo-copter.” It uses high tech cameras to assess the status of plant health known as “canopy vigor” and relate that to irrigation water use and evaporation from grapevines 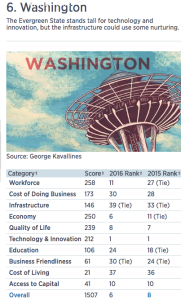