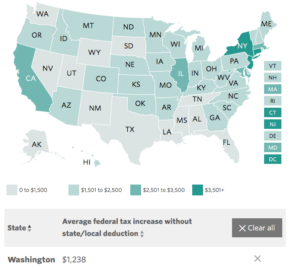 When U.S. Senate Democratic Leader Chuck Schumer of New York filed his 2014 federal tax return, he got to deduct about $62,000 from his taxable income — the amount he and his wife paid in state and local taxes.

Schumer is an example of the kind of taxpayer who benefits most from the ability to reduce federal income tax liability by deducting state and local taxes paid the year before. And he and millions of others stand to lose billions in tax benefits overall if a proposal being considered by President Donald Trump and the Republican-led Congress to scrap or reduce the deduction is enacted.

Like millions of higher-income taxpayers in high-tax states, Schumer itemizes his deductions rather than taking the standard deduction. To those taxpayers, the state and local write-off is worth a lot.

Critics of the deduction say it acts as a federal subsidy to states like New York that have higher income and property taxes.

Spokane initially lagged behind other West Coast cities in recovering from the Great Recession, but in the last few years, the local economy has produced a surge of higher-wage jobs.

Union membership in Washington increased in 2016, as Opportunity Washington noted a few weeks ago. Professors Barry Hirsch of Georgia State University and David Macpherson of Trinity University have since updated their data, which includes a break out of public sector and private sector unionization rates by state. In 2016, the total union membership rate in Washington was 17.4 percent, up from 16.8 percent in 2015.

If, as raising the minimum wage suggests, we are truly committed to helping low-wage workers and their families, we need to ensure the economy creates more jobs for them, not fewer. Then we need to take responsibility as a society for raising their take-home pay.

A wage subsidy, for instance, could put additional money from taxpayers into each low-wage paycheck. To the worker, it would look a lot like a minimum-wage increase. But for the employer and the economy, it would encourage the creation of more such jobs instead of their elimination.

That may sound expensive, but it is no more costly to the economy than a minimum-wage increase. Either way, someone has to put the extra money into each paycheck.

New Geography: How the visa ban will hurt U.S. innovation

Much of the talent that fuels America’s universities and tech hubs comes from abroad. Between 1990 and 2014 for example, the college-educated immigrant population increased 339 per cent from 3.1 to 10.5 million. A group of particular importance is graduate students in fields such as science, engineering and health. It is these individuals whose knowledge and innovative ideas fuel the technologically advanced businesses on which US exports rely. Among the graduate students in these fields, one third are not US citizens or permanent residents, but rather foreign visitors. In some fields, international students make up the majority. An analysis of the latest data shows that 61 per cent of full-time graduate students in computer science are international.In the field of Electrical Engineering the share is even higher, 72 per cent.

Pew Research: U.S. students’ academic achievement still lags that of their peers in many other countries

Recently released data from international math and science assessments indicate that U.S. students continue to rank around the middle of the pack, and behind many other advanced industrial nations.

One of the biggest cross-national tests is the Programme for International Student Assessment(PISA), which every three years measures reading ability, math and science literacy and other key skills among 15-year-olds in dozens of developed and developing countries. The most recent PISA results, from 2015, placed the U.S. an unimpressive 38th out of 71 countries in math and 24th in science. Among the 35 members of the Organization for Economic Cooperation and Development, which sponsors the PISA initiative, the U.S. ranked 30th in math and 19th in science.

The Lens: Improving Recruitment and Outreach Efforts in High-Demand Industries

Washington currently has a variety of job training programs to align residents to fill industry needs, but several business advocates say the state falls short on one piece of that formula: recruitment and outreach. Construction sector representatives testified this week in front of the Senate Higher Education Committee that SB 5713would improve employer efforts to close skilled workforce gaps by getting more people in the door.

The bill would create the Skilled Worker Outreach, Recruitment, and Key Training program, which would award matched private-public grants to bolster the state’s skilled workforce through business and industry partnerships. Applicants for the grant must either have a skilled worker training program, or are developing one. Also, they would be required to detail how the grant will help recruit employees into these programs and meet industry needs or workforce gaps.