The Federal Reserve Bank of Philadelphia has devised a way of summarizing state economic conditions, something they call “coincident indexes.”

The coincident indexes combine four state-level indicators to summarize current economic conditions in a single statistic. The four state-level variables in each coincident index are nonfarm payroll employment, average hours worked in manufacturing, the unemployment rate, and wage and salary disbursements deflated by the consumer price index (U.S. city average). The trend for each state’s index is set to the trend of its gross domestic product (GDP), so long-term growth in the state’s index matches long-term growth in its GDP.

It’s wonky, but if you go to the link you can get more on the methodology. For September, they find:

In the past month, the indexes increased in 41 states, decreased in six, and remained stable in three… 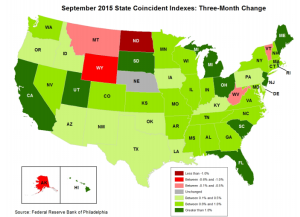 As the map shows, Washington did better than most. More here.

Superintendent of Public Instruction Randy Dorn has said he won’t run for a third term, but he doesn’t rule out running for another office. Former state representative Larry Seaquist tells the Kitsap Sun he’s “seriously exploring” a run for SPI. Two others have already filed for the office: Rep. Chris Reykdal, D-Tumwater and Erin Jones, of Lacey.

Tacoma has competing minimum wage initiatives on the ballot. The American Interest has a, well, interesting discussion of the morality of a $15 minimum wage.  The Puget Sound Business Journal explains how it works in Seattle.

Washington ranks 43rd on a new list of which states have the rudest drivers (that’s good, No. 1 is rudest). Neighboring Idaho claims the top spot. Apologists for Idaho blame the terrain and a general lack of urgency on the roads.

The Tax Foundation explains that raising federal income taxes on the 1 percent won’t raise a lot of money.