In the latest survey by Chief Executive, CEOs are reporting a renewed sense of confidence in where the business landscape will be a year from now, registering an average confidence level of 7.07 out of 10 on our monthly CEO Confidence Index, the highest level since April.

This represents a net change of 3.21% month over month— and a gain of more than 6% from September. The rebound comes amid signs that the GOP appears to be making headway on cutting business taxes in Washington.

Wall Street Journal (pro-con): Do States Have a Role in Making Climate Policy?

[Pro] Several states, spearheaded by the governors of California, New York and Washington, have pledged to fill the void in leadership by adopting their own strict climate policies. In principle, having a single federal policy is cheaper for industry and less prone to unintended consequences. But an unwieldy patchwork of 50 different state policies is an extremely unlikely outcome of state initiatives.

Much more likely, state efforts will eventually spur demand for strict federal policies, and operate at a regional level in the meantime.

[Con] Most state-level efforts to reduce greenhouse-gas emissions cannot help being incoherent and ineffective…Twenty-nine states have renewable portfolio standards, and lawmakers in both Massachusetts and California have recently proposed 100%-renewable mandates. If everyone tries to reach their goals, and more states feel compelled to join and out-green each other, the grid will fall apart.

This is not only irresponsible, but also fails to address climate change. Since nationwide carbon-dioxide emissions peaked in 2007, states with renewable portfolio standards have achieved smaller reductions, on average, than states without them.

The National Federation of Independent Business (NFIB) said that the Small Business Optimism Indexbounced back from 103.0 in September, its lowest level since the election, to 103.8 in October. Overall, small business owners remain very upbeat in their outlook, with the headline index averaging 104.6 year-to-date.

In comparison, it was 94.9 one year ago. In this release, the percentage of respondents suggesting that the next three months would be a “good time to expand” rose from 17 percent to 23 percent, and the net percentage feeling that sales would be higher over the next three months increased from 15 percent to 21 percent. Each of these figures were close to the year-to-date averages, with both up significantly from the rates seen last year.

Nearly half of all students who enter Washington’s community colleges earn a degree or certificate in eight years, or transfer to another school before getting a degree from their community college, new federal data shows.

And a few Seattle-area technical colleges — Renton Tech and Lake Washington Tech — do especially well at getting their students to the finish line, with rates of 74 percent and 55 percent, respectively…

The new data was recently published on the federal College Navigator website, and it looks at all students who earned a degree or certificate, regardless of whether they enrolled full-time. The new analysis also looks at completion rates over eight years rather than three — a nod to the fact that it can take much longer to complete a degree when a student is enrolled part-time. 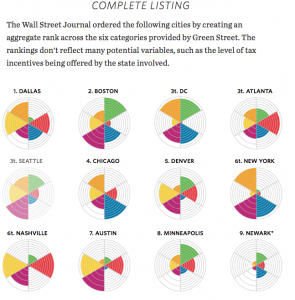 States collectively spent nearly $2 trillion in fiscal 2017, an increase of 5.2 percent, according to a newly released report from the National Association of State Budget Officers (NASBO). The growth rate is more than double that of fiscal 2016, which saw state budgets struggle to adapt to lower-than-expected revenues…

Whereas recent years’ spending increases have been largely driven by aid from the federal government, 2017 saw states upping the ante on their own. State spending from their own funds increased by 4.9 percent. That’s significant growth compared with 1.8 percent last year.

All this despite the fact that the revenue picture has seemingly improved very little. For the second straight year, corporate income tax revenue saw a nearly 6 percent decline, and growth in income and sales tax collections hovered below 3 percent.