We’re trying something new with our Friday Roundup today. Rather than a potpourri of unrelated stories that we found interesting, we’re pulling together a group of articles centered on a single issue.

This week, the issue is soda taxes, which are inviting a new look at state preemption of local taxing authority. With I-1634 apparently headed to the fall ballot, this is a good time to get some background on one of this issue. 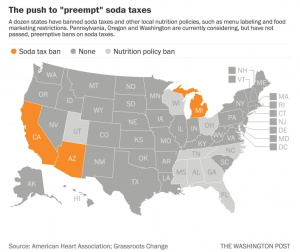 We’ll start by looking at several of our previous posts:

After turning in about 360,000 signatures on initiative petitions last week, the Yes on Affordable Groceries campaign held its official kickoff Monday, featuring representatives of labor and agricultural groups that back the measure.

“Food is a basic necessity,” said Kevin Roark, owner of the Bargain Giant Foods store in northeast Spokane. The initiative would keep local governments from taxing that necessity, he said.

In the first three months, the tax raised $4,446,000, nearly a million dollars more than was predicted. The city’s budget office estimated the tax would raise $14.8 million in its first year…

“Our sales are down probably 15 or 20 percent,” says Todd Biesold, CFO of Merlino Foods who sells beverage products wholesale to area restaurants…

A spokesperson from Seattle King County Department of Health says it’s too early to know if the tax is having its intended effect to cut down on people drinking sweetened beverages.

The state had been a hotbed for the soda-tax movement, having passed laws designed to slash soda drinking in four jurisdictions. But under the fast-moving ban introduced June 23 and signed into law five days later, no new food or beverage taxes can be passed in the state until 2031 at the earliest.

The law represents a significant, if long-anticipated, shift among the nation’s soda makers, who have previously fought taxes, city by city, and expended millions of dollars in the process. Soda companies say the statewide bans more efficiently protect jobs and businesses that could be hurt by local tax laws.

Major healthcare groups announced Monday that they will pursue a statewide soda tax initiative on the 2020 ballot to pay for public health programs. And in another jab at the beverage industry, the initiative would enshrine in the California Constitution the right of local governments to impose soda taxes.

If consumption doesn’t drop, the soda tax may be ineffective in improving health. And even if it generates new revenue for the municipality, those revenue gains could be lost to declining sales if the tax prompts people to shop outside the city.

Today the National League of Cities (NLC), in partnership with state municipal leagues, released an update to its report, City Rights in an Era of Preemption, that reveals state preemption of local authority is increasing throughout the country.

It is this simple recognition that supports higher-level preemption to prevent a deeply encumbered world of restrictions imposed by people who place particularly high value on local activities. A city’s ban on plastic bags, for instance, will have little perceptible impact on key political figures within the town that banned the bags, leading to relatively few voices being raised in opposition. At the statewide level, however, opposition would surely be stronger.