Yesterday we wrote about the rise in state unemployment benefit claims, as well as about the still-staggering national numbers. Today, the Tax Foundation provides further analysis of the national data. Consider this map. 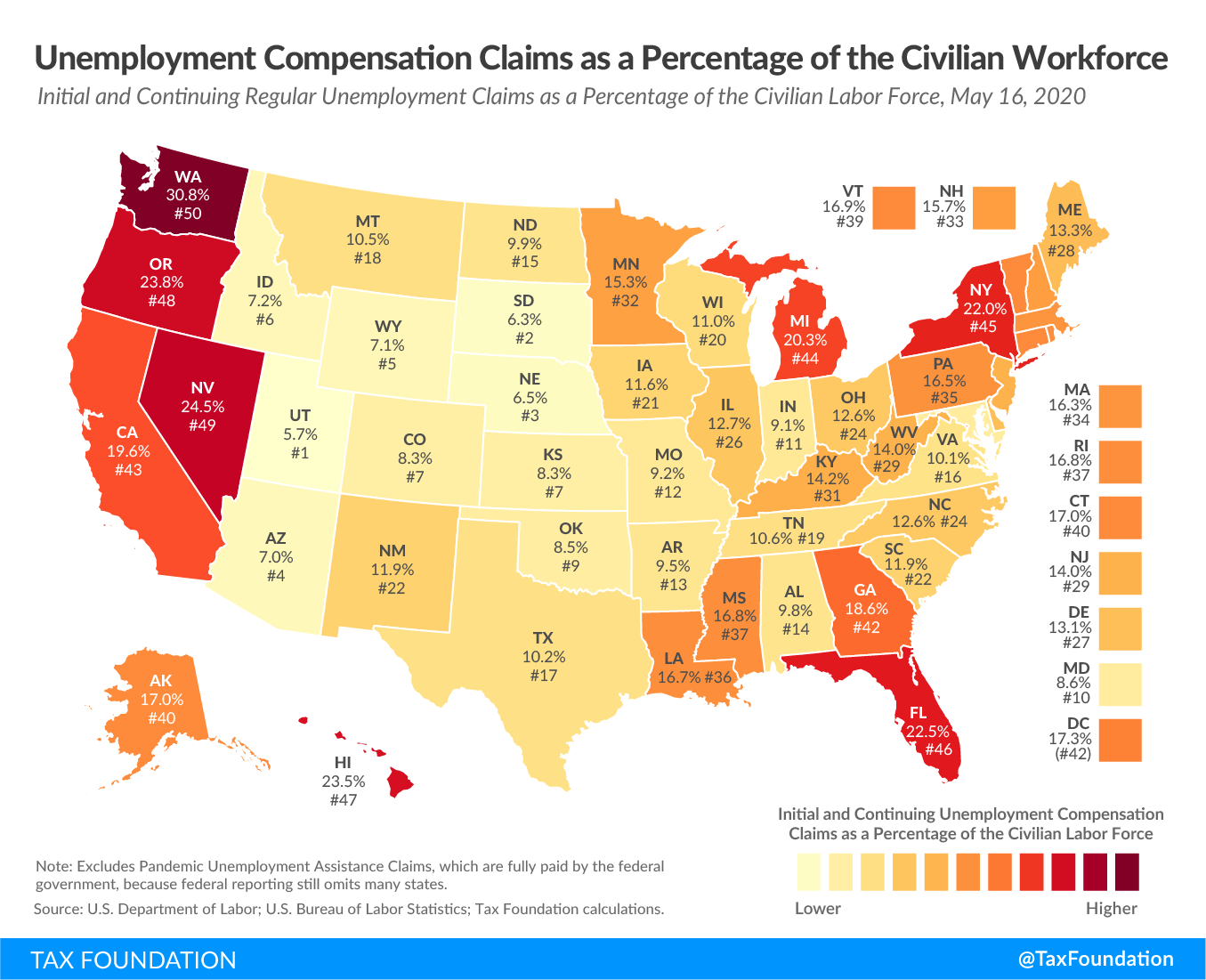 There’s Washington at No. 50, with 30.8 percent of the civilian workforce claiming unemployment benefits. No. 49, Nevada, reports 24.5 percent. Washington stands a part, not just a bit above the rest but with a significantly higher share of the workforce filing claims, even when compared with the other western states that pursued a similar lockdown strategy. Michigan and New York, also following a stiffer lockdown model, come in at No. 44 and No. 45 respectively.

Approximately 15.2 percent of the U.S. civilian labor force has now applied for or is receiving unemployment compensation benefits (through May 16, the latest data). Counting pandemic claims, over 20.2 percent of the U.S. workforce has applied for or is receiving benefits, and this number is almost certainly too low, as federal data on pandemic claims still omits many states entirely. The previous high was 7.9 percent early in 1975 during a recession, with a Great Recession peak of 4.8 percent between February and April 2009. Entering March 2020, unemployment claims as a percentage of the civilian labor force stood at 1.4 percent.

The map … only includes regular unemployment claims since reporting of pandemic claims is still too inconsistent to allow comparisons.

During the week of May 10-16, there were 138,733 initial regular unemployment claims (an increase of 29,308 from the previous week) and 1,670,580 total claims for all unemployment benefit categories (an increase of 369,016 from the previous week) filed by Washingtonians, according to the Employment Security Department (ESD). ESD believes some portion of the high numbers from the past week are due to an increase in fraudulent claims and is looking into how best to correct for that in future reporting cycles. (Emphasis added.)

Washington state officials have acknowledged losing “hundreds of millions of dollars” to an international fraud scheme that stung the state’s unemployment insurance system and could mean even longer delays for thousands of jobless workers still waiting for legitimate benefits.

Suzi LeVine, commissioner of the state Employment Security Department (ESD), disclosed the staggering losses during a news conference Thursday afternoon. LeVine declined to specify how much money was stolen during the scam, which is believed to be orchestrated out of Nigeria. But she conceded that the amount was “orders of magnitude above” the $1.6 million that ESD reported losing to fraudsters in April…

Thursday’s disclosure helped explain the unusual surge in the number of new jobless claims filed last week in Washington. For the week ending May 16, the ESD received 138,733 initial claims for unemployment insurance, a 26.8% increase over the prior week and one of the biggest weekly surges since the coronavirus crisis began.

That sharp increase came as the number of initial jobless claims nationwide fell 9.2%, to 2.4 million, according to data released earlier in the day by the Labor Department.

The Tax Foundation also examines how states are handling the surge in claims with respect to employer costs. Katherine Loughead writes,

One way policymakers can help expedite their state’s economic recovery is by protecting employers from facing higher UI tax rates at a time when they can least afford to pay them.

As of mid-May, 26 states and the District of Columbia have declared—mostly through executive order or labor department guidance—that COVID-19-related layoffs will not be charged against employers for purposes of calculating the experience ratings that determine their UI tax rates. This is a reasonable way to help protect businesses and industries that have been disproportionately impacted by mandated business closures and stay-at-home orders. It will also help ensure more businesses will be able to survive this crisis and rehire their employees once they can safely resume operations.

Here again Washington is something of an outlier. 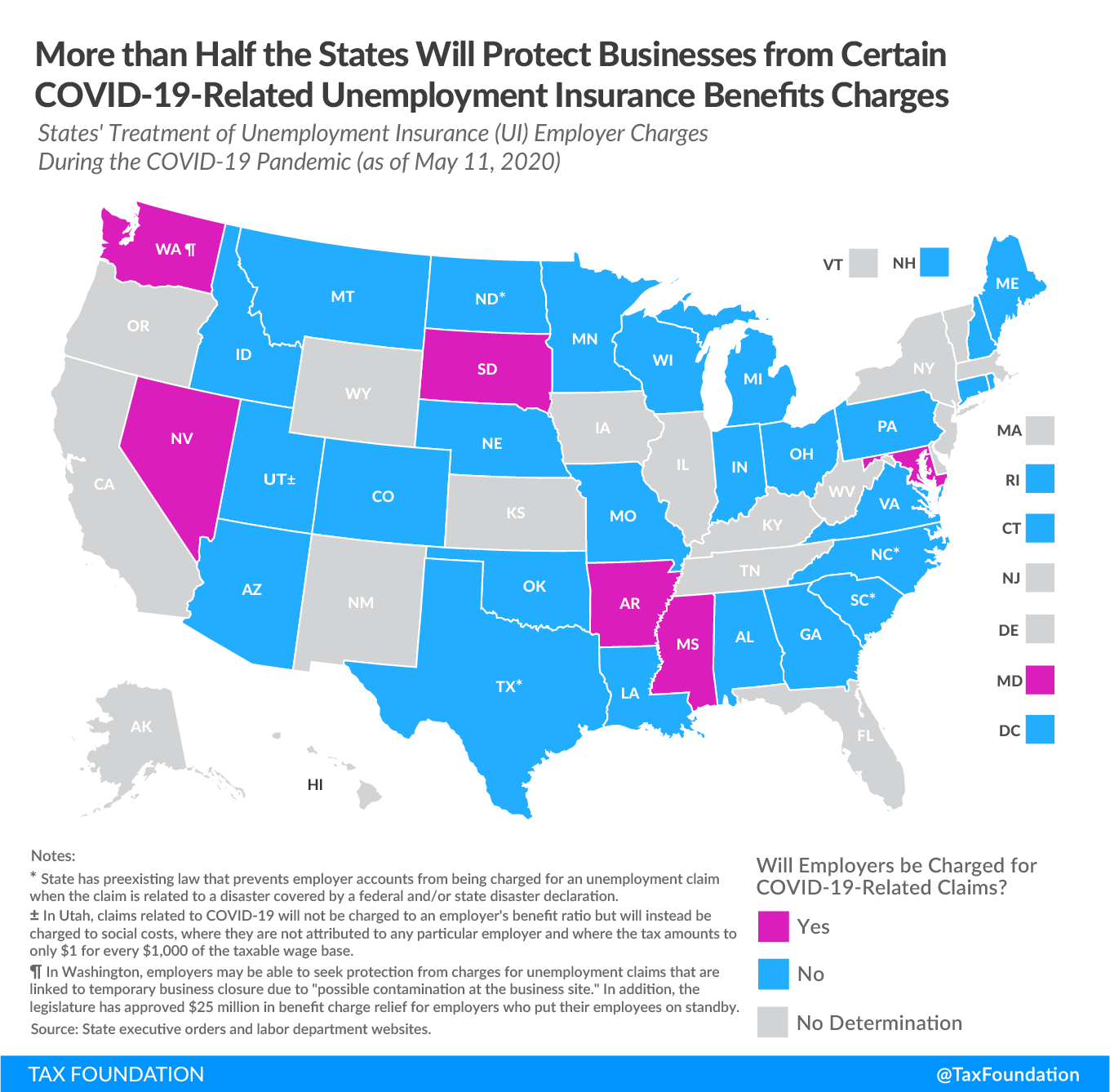 As shown in the above map, 26 states and the District of Columbia have waived all employer charges (meaning they have frozen experience rating impacts) that otherwise would occur due to COVID-19-related layoffs. For example, in Arizona, Gov. Doug Ducey (R) issued an executive order stating, “The Arizona Department of Economic Security may not consider unemployment benefits granted pursuant to this Executive Order against an employer’s account.” Notably, several of the states that are not charging employers for COVID-19-related claims, including North Carolina, North Dakota, South Carolina, and Texas, had prior laws in place that prevent employers from being charged for unemployment claims that arise due to any disaster that is covered under a federal disaster declaration (or under a state disaster declaration in South Carolina and Texas).

Meanwhile, six states—Arkansas, Maryland, Mississippi, Nevada, South Dakota, and Washington—have specifically said that based on current law and plans, employers will be charged for layoffs despite the extenuating circumstances surrounding this pandemic. (Washington has provided some flexibility; the state plans to charge employers for pandemic-related claims except for claims that arise due to the temporary closure of a business due to potential contamination of the business site. In addition, the legislature has appropriated $25 million to provide employers with relief from charges for employees who were put on standby.)

The Monthly Labor Report for May is scheduled to be released on June 17. Based on the large number of initial claims for unemployment insurance filed in April and early May, I expect that report will show another large drop in employment. After that, the state economy should begin to recover as the most densely populated parts of the state enter phase 2 of the reopening process. The speed of recovery is uncertain, however, as is the extent to which the pandemic itself and the resulting lockdown have done long-term damage.

Which adds to our concerns that rising unemployment insurance costs do not hinder recovery.