Voters routinely say increasing public education funding is one of their top legislative priorities. In Washington, following the long-running McCleary school funding case, this year is a bit different. As pollster Stuart Elway writes of the recent Crosscut/Elway Poll,

Respondents were asked to identify what issues they felt the Legislature must address this session, an open-ended question. In response, 27 percent included issues that are traditionally associated with social service, including mental health and homelessness.

The result represents a sea change for this portion of the poll, which is asked before every Legislative session. For the four years prior, education had been the top priority, likely a result of the Legislature’s long struggle to fulfill a court-ordered mandate to fully fund education. The matter was settled last year.

It was”settled” last year when the state Supreme Court agreed the state had met its McCleary obligations; but, no doubt, education finance will continue to feature in legislative discussions. But questions arise: How much do voters know about school spending? When they say they’d like to see spending increased, do they know how much is currently being spent?

An Education Next poll finds a large discrepancy between perception and reality. As the graph below shows, voters across a range of subgroups routinely underestimate school spending. (The “actual” numbers vary slightly because the actuals reflect the actual spending in respondents’ school districts.)

Given the long-running public debate here, we suspect Washington voters may be more knowledgeable, as suggested by the Elway results. 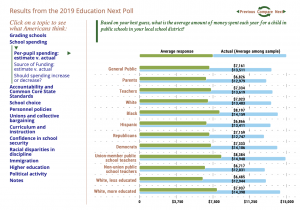 Most people express strong opinions about public education. But only a few know the basic facts about the public schools: how much they spend, how well teachers are paid, and what schools can and cannot do…

Surveys … consistently reveal widespread misunderstanding of our schools and of prominent efforts to reform them. Consider the issue of school spending. Our research shows that Americans dramatically underestimate the amount spent on public schools in their districts, even when prompted to consider the full range of uses to which school spending is devoted.

Most Americans do not know how much their local school districts are spending on education, according to a new national survey…But what does surprise us is the size of the misinformation gap: Americans vastly underestimate per-pupil expenditures, by $6,122 on average.

A decade later, not much appears to have changed. It’s a remarkably persistent finding. Maureen Sullivan, writing in Forbes in 2016, reports on a different poll with similar results.

Do you know how much, on average, Americans spend on each of the more than 46 million students in the country’s public schools?

It’s about $11,000. But only 15% of respondents to a new poll could estimate the correct range of per-pupil spending. That’s according to a study released this month by EdChoice, the new name of the Friedman Foundation for Educational Choice.

As Education Next reports, the gap matters.

Perceptions matter, as does information. And, of course, the polling doesn’t tell us much about how much should be spent or how the money should be invested. Still, an interesting perception gap.