The SThe governor is rolling out his budget in stages this week. Monday he presented a $365 million equity package. 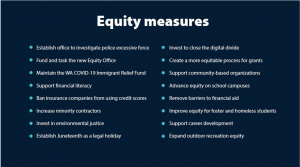 The Seattle Times reported on the proposal.

Washington Gov. Jay Inslee on Monday unveiled a slate of proposals intended to boost diversity and equity, which includes a proposed independent office for investigating deadly force by law enforcement, funding the state’s new equity office and establishing Juneteenth as a legal holiday.

The plan, among other things, would also spend $10 million to maintain the state’s COVID-19 relief fund for undocumented immigrants who have suffered due to the pandemic.

The Spokesman-Review also reported on the plan.

“We have a moral mandate in Washington state to acknowledge these hard truths and lay a solid foundation needed to correct these longstanding injustices,” Inslee said Monday.

The May 25 killing of George Floyd in Minneapolis by police sparked nationwide protests and discussions on addressing systemic racism. In Washington, the March 3 death of Manuel Ellis in Tacoma during an arrest by police led to similar anger statewide.

These proposals are a response to those calls for action, according to Inslee’s policy brief.

In terms of funds subject to the outlook, the proposal includes:

The governor’s full budget plan will be released by the end of the week.