Gov. Jay Inslee has ordered sweeping new restrictions in an effort to contain the spread of the coronavirus as cases are spiking in Washington, as shown in the chart below from the governor’s Medium page. 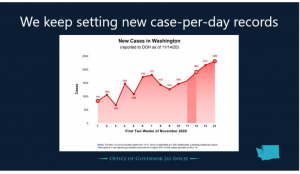 This spike puts us in a more dangerous a position as we were in March,” Inslee said during a press conference Sunday. “And it means, unfortunately, the time has come to reinstate restrictions on activities statewide to preserve the public’s well-being, and to save lives. These were very difficult decisions that have very real consequences to people’s livelihoods. I recognize that and don’t take those impacts lightly, but we must act now and act quickly to slow the spread of this disease.”

To help mitigate financial impacts on businesses and their employees, the state will commit $50 million in aid.

The Seattle Times reports that the new restrictions are the most sweeping since the stay-home order in March.

Social, economic and cultural life in Washington will grind to a halt at 11:59 p.m. Monday night, as Gov. Jay Inslee orders broad restrictions and shutdowns for restaurants, theaters, gyms and all indoor gatherings in an effort to slow the state’s burgeoning coronavirus epidemic.

Inslee, Sunday morning, ordered restaurants and bars to shutdown indoor service and to limit outdoor service to parties of five or less. Indoor gyms and fitness centers must also shutdown. Same with movie theaters, bowling alleys and museums. Indoor gatherings with people outside your household will be prohibited unless participants have quarantined and tested negative.

ST reporter David Gutman writes, “The full list of restrictions going into effect is daunting.” Here they are. The ST also has a “what you can and can’t do” story on the restrictions.

With a second wave of business shutdowns and other restrictions barely a day from taking effect, business leaders and economists were bracing for new economic shocks with only modest prospects for significant government aid. And some of the worst pain will strike sectors already hard hit during the pandemic…

Although less severe than last spring’s stay-at-home of restrictions, the second round is expected to deal a harsh economic blow to many sectors that have already suffered heavy losses and massive layoffs, and had been desperately eyeing the holiday season as a chance for some small recovery.

In the state’s hospitality sector alone, “this devastating decision will lead to 100,000 or more jobs lost overnight,” Anthony Anton, president of the Washington Hospitality Association, predicted in a statement Sunday about Inslee’s new directives.

As noted above, Inslee plans to provide $50 million in business assistance. The ST reports that assistance is seen as not enough.

On Sunday, he announced a plan to distribute $50 million in federal funds to affected businesses and workers.

But that’s a relatively modest relief package, especially compared with several federal pandemic-relief programs, which brought the state more than $12 billion in forgivable small-business loans and more than $6.4 billion in enhanced unemployment benefits before they expired.

The $50 million Inslee proposed is “a drop in the bucket of what’s really needed,” said Thomas Gilbert, an associate professor of finance and business economics at the University of Washington Foster School of Business.

Additional federal relief remains in doubt, so the state role becomes more important even though, as Inslee noted, the state already faces a billion-dollar budget shortfall and has limited ability to finance a major aid package.

Without substantially more state or federal relief, employers are facing more closures and layoffs, Gilbert said. “It’s the same thing” as last spring, he said. “If you’re going to shut [businesses] down, you need to take over their payroll and their fixed expenses — otherwise, these businesses will go bankrupt.”

Gilbert said the governor and state lawmakers should have agreed to a larger aid package before the new restrictions were announced.

And, again, talk of a special legislative session has come up.

Inslee said he believed the relief programs he has proposed could be implemented via executive order, without legislative action. “But if it is necessary, we can do that, and I’ll be talking to legislators,” he said.

AWB joins with the governor in calling on Washingtonians to make responsible decisions at home to slow the spread of the virus. Employers have been doing their part over the last eight months to keep employees and the public safe, whether it’s manufacturing much-needed personal protective equipment (PPE), adapting to work-from-home, joining public health officials in promoting the use of face masks, altering employee work schedules, investing in PPE, supporting employees as they care for children, or adopting new safety protocols. Employers have not only adapted; they have led the way. At this critical moment, it’s imperative that all Washingtonians do their part — at work and home.

Although the current spike in Covid-19 cases is largely the result of private social gatherings, the new restrictions will deal another significant setback to businesses that are struggling to survive following the shutdown this spring. We need to find a way to knock down this virus without closing more businesses and putting more employees out of work.

Recent news about vaccine development is encouraging, but we fear the restrictions announced today will cause more businesses to close their doors before a vaccine can be deployed. This only makes the need for both state and federal aid more urgent.

We all play an important role in beating this virus, getting our children back in school and rebuilding the economy.

The best news of the day is the announcement that a second vaccine is showing success.

Moderna said Monday its COVID-19 vaccine is proving to be highly effective in a major trial, a second dash of hope in the global race for a shot to tame a resurgent virus that is now killing more than 8,000 people a day worldwide.

The company said its vaccine appears to be 94.5% effective, according to preliminary data from Moderna’s ongoing study. A week ago, competitor Pfizer Inc. announced its own COVID-19 vaccine appeared similarly effective — news that puts both companies on track to seek permission within weeks for emergency use in the U.S.

It can’t come too fast.