The Puget Sound Business Journal reports on a meeting Gov. Jay Inslee had with biotech leaders on how to help the industry. The crux:

Those are some of the suggestions Gov.Jay Inslee got when he asked Seattle-area biotech company leaders how Washington state can improve its environment for the industry during a panel at Seattle’s Cambia Grove on Friday.

Venture capital remains a problem, despite the region’s relatively positive ranking, as we noted here.

Washington currently ranks fifth among the states in patents generated, fifth in venture capital investment, and sixth in research and development spending.

Inslee noted the lack of investors in the Seattle area, even though companies here might be able to connect with venture capital firms in Silicon Valley.

“This capital issue is really bedeviling us,” Inslee said. “One of the things I can’t quite figure out is in the days of the internet, why capital is so relative to geography. What can we do to unlock that?”

A 2013 article by competitiveness guru Richard Florida helps put the challenge in perspective. Though the Seattle metro area ranks well, once you drop below the top two , the shares get small quickly. Check out the story, but consider this table: 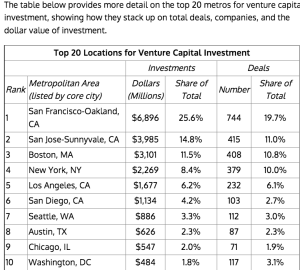 Although this ranking shows Seattle in the top 10, It accounts for just 3.3 percent of the dollar value of investments and 3.0 percent of the deals. The concentration of capital is clear.

The governor is asking the right question: How do we unlock that here?