Gov. Inslee today released his plans for funding education. There will doubtless be much more written on his proposals, including by us. But we suspect today’s headline will be the revenue package. 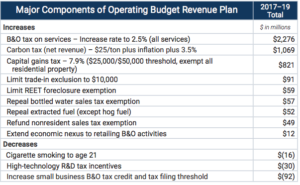 Overall, the governor is proposing nearly $4.4 billion in net new revenue for the 2017–19 operating budget. The vast majority of that will go toward ensuring sustainable full funding for education, signi cantly expanding community services for mental and behavioral health services, and supporting investments in homelessness, public health and other key priorities. The governor is proposing about $800 million in additional new revenue to fund projects in his capital budget.

Under the governor’s plan, every school district would receive more money from the state. The infusion of state funding would reduce local school district property tax levies. Initial estimates indicate that local school taxes during the next biennium would be reduced by at least $250 million per year and that more than three-fourths of households and businesses statewide would get a property tax cut.

Gov. Inslee proposes a capital gains tax on the sale of stocks, bonds and other assets to increase the share of state taxes paid by Washington’s wealthiest taxpayers.

The state would apply a 7.9 percent tax to capital gains earnings above $25,000 for individuals and $50,000 for joint filers. The new tax would affect an estimated 48,000 taxpayers. Retirement accounts, homes, farms and forestry are exempt. The proposal will raise an estimated $821 million in fiscal year 2019.

The actual amount collected will depend on fluctuations in the financial markets, and can be expected to vary from year to year. The state can manage these fluctuations through careful budgeting. Earned income from salaries and wages are not capital gains and will not be taxed at all under this proposal.

The rest of the governor’s budget will be released tomorrow.