Gov. Jay Inslee released his budget proposal for 2021-2023 and a supplemental budget for the balance of the current fiscal year. Here are the Budget and Policy Highlights, a shorter discussion on the governor’s Medium page,  and an accompanying policy brief.

The headline news: The budget proposal increases biennial spending by $5 billion, includes a 9% capital gains tax, a new fee on health insurers and others, and spends down the state’s budget reserves.

The Washington Research Council has a short, initial assessment of the proposal, with more to follow over the coming weeks.

The 2021 supplemental would reduce appropriations from funds subject to the outlook (NGFO) by $915 million. The 2021–23 proposal would appropriate $57.8 billion, including $1.7 billion in new policy.

Despite the improved revenue forecast, the governor is proposing a 9% capital gains tax that would take effect in the second year of 2021–23. This is estimated to increase 2021–23 revenues by $1.1 billion. (In November, the Economic and Revenue Forecast Council estimated that 2021–23 revenues will already increase by $3.7 billion over 2019–21.)

We recommend reading the WRC post, which includes this graph showing spending the expenditure trend. (Recall, pre-pandemic we warned that the state’s spending trajectory was unsustainable. The graph shows the spending pattern extending  almost as if there were no recession.) 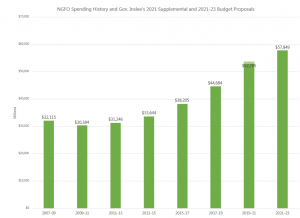 The governor’s new proposed 2021-23 state operating budget would spend $57.6 billion, with a focus on boosting public health spending amid a pandemic and the ensuing restrictions that have shuttered businesses and schools and caused an economic downturn.

“This is for our state to attack the multiple crises that we have, associated with the COVID pandemic,” said Inslee in a news conference. “And this is a budget that is built on giving Washington state relief and recovery and resilience.”

ST reporter Joseph O’Sullivan lays out key provisions of the budget proposal. The capital gains tax, which the governor has proposed before, remains controversial. The ST reports,

Inslee’s budget plan includes a proposed 9% tax on capital gains earnings above $25,000 for individuals or $50,000 for joint filers. That proposal — which wouldn’t begin bringing in money until fiscal year 2023 — would exempt sole-proprietor businesses, homes, retirement accounts, farms and forestry, and income from salaries.

The governor and Democrats have proposed a version of the tax in recent years, and House Democratic lawmakers have insisted they have the votes for a plan. But neither chamber has voted on such a tax, and a handful of moderate Democratic senators have previously opposed it.

Of the other new revenue measure, The Seattle Times reports,

The governor is also proposing to raise revenue through an assessment on health insurers, limited health-services contractors and Medicaid managed-care organizations, among others. That monthly, per-member fee would be overseen and adjusted by the state office of the insurance commissioner.

Governors are required to release their budget plans in December. The Legislature convenes in January, conducts hearings and in odd-numbered years writes the two-year budget. Much more to come.