According to a report released today by Headlight Data, an online data aggregator, Seattle had the 6th highest average salaries among metro areas with population of 1 million or more. 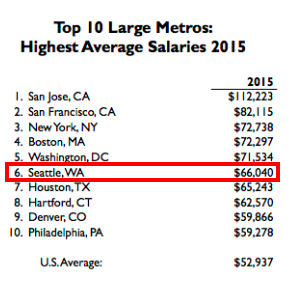 For this analysis, Headlight Data draws on 2015 data from the U.S. Bureau of Labor Statistics.

We’d be inclined to say that the already high base caused Seattle to fall down in the rankings of wage growth. The city finished in the second lowest quintile, as the map below shows. 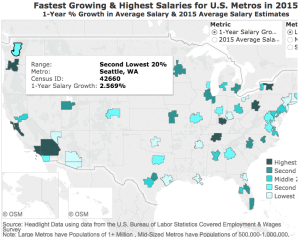 Yet, undercutting that theory a bit, the top 10 cities for wage growth include three of the high-wage top 10 – San Jose, San Francisco, and Boston — with San Jose again ranking first. And Seattle’s 2.6 percent growth rate was below the 3.1 percent average. 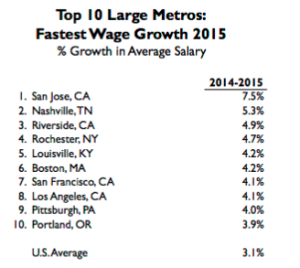 So, a mixed report from Headlight.

Yet this study reported on by Geek Wire last April finds much stronger wage growth.

The Seattle-based compensation data firm released its index of annual wage growth in the U.S. and its hometown outranked all other metros.

Here’s the top 5 from their report.

The PayScale report is not directly comparable to the Headlight data. PayScale includes more recent quarterly data. The chart below shows that 2016 has been much stronger than 2015. Further, PayScale is not using the BLS compensation data. Rather,

[PayScale] tracks changes in total cash compensation for full-time, private industry employees in the United States. The PayScale Index has not been adjusted for inflation. It is based on actual wages. In addition to a national index, it includes separate indices for specific industries, metropolitan areas, job categories and company sizes. 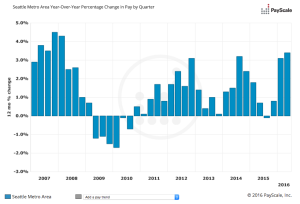 Other thoughts? Fun with data.