Agreement on a federal infrastructure funding bill remains elusive, caught up in the hot mess of this D.C. summer. But political neglect doesn’t obscure the reality that infrastructure needs grow more urgent each day.

The U.S. Chamber of Commerce and the AFL-CIO support a $2 trillion investment.

The Business Roundtable has documented the need for a renewing America’s infrastructure, including the benefits to our state.

So has the National Association of Manufacturers.

And yet, little gets done. In Governing magazine, an interview with Dave Bauer, the CEO of the American Road & Transportation Builders Association, adds another informed call to action.

…Bauer recognizes the formidable challenges to getting any infrastructure package through Congress as the next presidential election looms. The biggest obstacle, he says, is addressing the growing shortfalls in the Highway Trust Fund, the federal government’s main source of surface transportation money. It is primarily funded with fuel tax revenues, but the federal gas and diesel tax rates haven’t been raised since 1993.

The continuing shortfalls in that fund — which are now up to $18 billion a year — are a “a 50-pound weight that the highway and public transportation programs have been carrying around for 11 years on their back,” Bauer says. Congress needs to shore up those finances as part of any broader infrastructure deal, he adds.

For those who have followed the inaction in recent years, much of the interview will cover familiar territory. It includes a link to a map of how the federal infrastructure dollars are distributed to the states. We don’t know all the underlying details, but it appears to show Washington receiving a below-average share of federal funding. 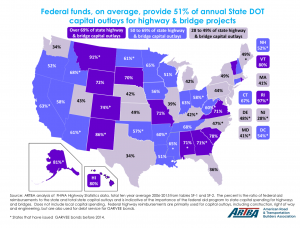 State efforts in a vacuum are not going to produce the solutions that they want more of, or that the American people need. [Bauer points to a map showing how much of each state’s road construction budget is paid for by the federal government. It shows the federal share is 70 percent or higher for 14 states.]States in a lot of areas have stepped up and done their part. It’s very fair for them to ask their federal elected officials to do their part now.

We need to be is moving away from what has occurred in the last two years, which is a bunch of people talking about infrastructure. We need people actually starting to legislate on infrastructure.