You can’t walk through any commercial district without seeing a “help wanted” sign, or so it seems. Employers continue to struggle with job vacancies. Today’s Job Openings and Labor Turnover (JOLT) Survey confirms the persistence of the labor shortage. Here’s the short take:

The number of job openings increased to 11.0 million on the last business day of October, the U.S. Bureau of Labor Statistics reported today. Hires were little changed at 6.5 million and total separations edged down to 5.9 million. Within separations, the quits rate decreased to 2.8 percent following a series high in September. The layoffs and discharges rate was unchanged at 0.9 percent. This release includes estimates of the number and rate of job openings, hires, and separations for the total nonfarm sector, by industry, by four geographic regions, and by establishment size class.

If you’re searching for a glimmer of good news in that, it’s in the reduction in the number of separations. More on that:

The number of quits decreased in October to 4.2 million (-205,000). The quits rate decreased to 2.8 percent. Quits decreased in several industries with the largest decreases in transportation, warehousing, and utilities (-57,000); finance and insurance (-45,000); and arts, entertainment, and recreation (-33,000). Quits increased in state and local government, excluding education (+21,000) and in mining and logging (+6,000). The number of quits was little changed in all four regions.

CNBC reports it as a welcome slowdown in the Great Resignation.

The so-called Great Resignation lost some steam in October, with the total number of workers leaving their jobs either due to dissatisfaction or better opportunities elsewhere declined, the Labor Department reported Wednesday.

Job quitters declined by 4.7%, falling to 4.16 million from 4.36 million, the department said in its Job Openings and Labor Turnover Survey. The rate as a share of the workforce fell from 3% to 2.8%.

The number of openings exceeded those looking for jobs by 3.6 million in October. JOLTS data runs a month behind the more closely followed nonfarm payrolls report, which showed a gain of 546,000 for the month.

Calculated Risk puts this in perspective. Here’s the CR chart. 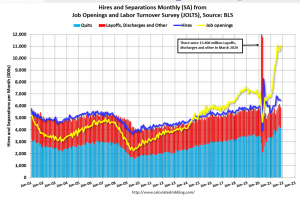 The huge spike in layoffs and discharges in March 2020 are labeled, but off the chart to better show the usual data.

Jobs openings increased in October to 11.033 million from 10.602 million in September.

The number of job openings (yellow) were up 61% year-over-year.

Quits were up 24% year-over-year. These are voluntary separations. (See light blue columns at bottom of graph for trend for “quits”).

For a lengthy discussion of the reshaping of the labor market, we recommend this piece by Joel Kotkin.