Around the country, higher education is being buffeted from all directions. Nearly all the major revenue sources — tuition, room and board, activity fees, charitable giving — are under severe pressure. The problems will grow decidedly worse if campuses aren’t able to open up again in the fall, a scenario that looks increasingly likely.

Public colleges and universities are certain to see cuts in aid from financially strapped states. “States will miss hundreds of billions, if not more, in revenue that will never be recovered,” said Dan Malloy, chancellor of the University of Maine System. “This is the downturn of 2008 on steroids.”

A shakeout has been expected, he writes.

There were already real questions about whether regional universities, which have been struggling to attract students, could survive. The same is true even for small private colleges, which offer heavy tuition discounts but don’t have large endowments to back them up. “We were aware of these trends prior to this,” says Aims McGuinness, a senior fellow with the National Center for Higher Education Management Systems (NCHEMS). “What this is going to do is make them horrifyingly graphic.”

Read the whole thing. He does a good job of showing the interplay between various revenue streams, enrollment decisions, and the particular vulnerability of higher education as one of the more discretionary elements in state budgets.

Washington’s been here before. According to a report by a 2012 report by the Washington Higher Education Coordinating Board,

Washington has a history of state support for higher education going back to the mid-19th Century. But, unlike basic education, higher education constitutes the largest source of discretionary funding in the state budget. State government is not required to provide a particular level of higher education for its citizens.

As the chart below illustrates, times of declining state revenue often cause leaders to reduce state support for higher education and increase student tuition. These shifts create enormous uncertainty for students and threaten the quality of educational programs. 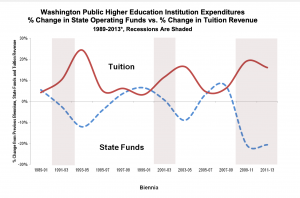 As the Washington Research Council has reported, the state budget will face heavy stress in the coming biennium, if not before.

Moody’s Analytics has run a fiscal stress test “to gauge the potential fiscal shock that could be in store for states in the COVID-19 economy.” The test considers revenue shortfalls and increased Medicaid spending and finds that in the baseline scenario (in which business and travel restrictions are lifted in the second quarter of 2020), the fiscal shock to Washington is -$3.507 billion (15.8 percent of FY 2019 revenues)…

With the state already falling far short of hitting the target of 70% postsecondary credential attainment, lawmakers will need to manage a difficult fiscal balance in preserving and expanding economic opportunity through wise investments in higher education.