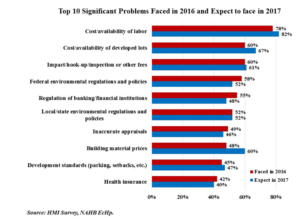 The National Association of Home Builders reports that the availability and cost of labor is the top challenge facing its members this year.

The monthly NAHB/Wells Fargo Housing Market Index includes a set of “special” questions on a topic of current interest to the housing industry. In December 2016, the special questions asked builders about the problems they faced in 2016 and expect to face in 2017.

We’ve written often about the challenges employers face in recruiting and retaining the workforce, most recently in commenting on research identifying 740,000 new job opportunities in our state in the next five years. In our foundation report released two years ago, we pointed out,

It is important to remember that, despite the challenges facing technology employers, the skills mismatch does not exist solely in the tech sector or for those positions requiring advanced degrees.

On 2012, manufacturers told the Association of Washington Business (AWB) that they experience dif culty in recruiting high-level workers (managers and engineers), citing shortfalls in math and critical-thinking skills.25 Those views have been reinforced in the Washington Employer Survey conducted every two years by the state Workforce Training and Education Coordinating Board, in conjunction with AWB and the Washington Chamber of Commerce Executives. Those survey results reveal that of some 60,000 employers who hired in 2012, “one in five had difficulty finding qualified applicants.”The biggest problem identified by those who had difficulty hiring was the lack of occupation-specific skills. The report found that despite progress in degree production in computer science and engineering, “the rate of progress… is still lagging behind surging demand.”

With housing demand surging in our state, the NAHB report on the national labor market trends justifies some concern about a similar challenge here. The lack of skilled labor could threaten to exacerbate housing affordability problems already partially strained by supply constraints.