Apartmentlist.com has conducted a renters’ survey that helps put regional problems in perspective.  Unfortunately, that perspective confirms that metro Seattle ranks among the least affordable places in the nation, as the map below makes clear. 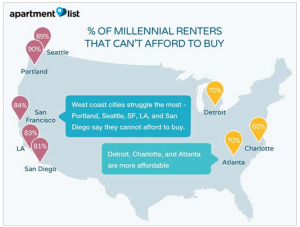 According to the survey, which we recommend reading in full,

Our research indicates that the vast majority of millennial renters (79%) want to purchase a home, but that affordability is the biggest obstacle that they face. The issue is particularly acute on the west coast: more than 80% of millennials in Portland, Seattle, SF, LA, and San Diego say they cannot afford to buy.

Worryingly, we find that millennial renters in expensive metropolitan areas significantly underestimate the amount they need to save for a down payment, in many cases by 50% or more. Using data on starter home prices and millennials’ average savings rates currently, we estimate that many renters will need a decade or more before they can afford a 20% downpayment on a home.

Perhaps surprisingly, two metropolitan areas that have been among the greatest beneficiaries of the housing affordability driven net domestic migration from coastal California, Portland and Seattle, scored the worst on affordability as a barrier to purchasing homes (90 percent and 89 percent respectively). These areas were once much less expensive in the past, but are rapidly catching up with California in terms of unaffordability.

Noting  the survey’s finding that most millennials aspire to home ownership, Cox writes,

But the most important bottom line conclusion of the research is what apartmentlist.com calls the “affordability gap.” This is the difference between the actual time required to accumulate a down payment and the time expected by survey respondents. The biggest affordability gap is in San Francisco, where respondents expected down payment requirements that would take only 11 years more to save. The reality, according to the study, is 28 years, more than 2.5 times that figure. In Sacramento, respondents expected that it would take 16 years, still far short of the more realistic 27 years. In Los Angeles, San Diego and Denver, it is likely to take from eight to ten years more to save enough for a down payment than survey respondents estimate.

Not mentioned in the survey are factors driving up housing prices. While rapidly-growing metros will experience price increases as a result of limited supply confronting escalating demand, other factors may come into play.

The Washington Research Council reports on research by Zillow that strongly suggests that Seattle regulation increases housing costs. (Follow the link for more discussion, including a graph plotting metro area rents against land use regulation.) Here’s the crux:

The piece has this to say about Seattle:

Seattle is both highly regulated and fast-growing, boosting its employment rate by 8.6 percent between 2011 and 2014. Seattle’s stricter regulation has made it difficult for the city to meet the increasing demand brought on by job growth, contributing to a large 1.3 percentage point drop in the share of homes for sale over the past five years.

. . . the shortage of urban dwellings is mainly artificial. Our big cities, even New York, could comfortably hold quite a few more families than they do. The reason they don’t is that rules and regulations block construction. . . .

But building policies in our major cities, especially on the coasts, are almost surely too restrictive. And that restrictiveness brings major economic costs.

We would also note that regulatory uncertainty was cited as the reason a group canceled plans for a $3.4 billion methanol plant at the Port of Tacoma.

In our foundation report, we wrote of the importance of regulation to economic vitality and shared prosperity.

While regulations ultimately reflect Washingtonians’ policy preferences, they should be regularly reviewed to see if, for example, the benefits justify the added costs of compliance.

As policymakers work to relieve the shortage of affordable housing, the costs of regulation should be one of the items to be checked off the punch list.