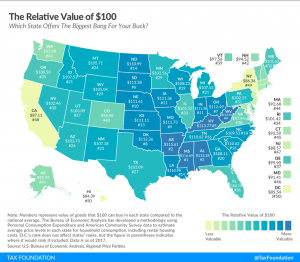 Does a dollar not stretch as much as you think it should? If so, it may depend on where you live. Here in Washington, according to the Tax Foundation, that buck is only worth about 94 cents. That puts our state No. 43, with No. 1 being the best value (Mississippi). Clearly, there’s more to consider.

Prices for the same goods are often much cheaper in the more rural areas of states like Missouri or Ohio than they are around large cities in states like New York or California. As a result, the same amount of cash can buy you comparatively more in a low-price state than in a high-price state.

The U.S. Bureau of Economic Analysis has been measuring this phenomenon for four years now; it recently published its data for prices in 2017.

A number of factors are at play:

Regional price differences are strikingly large; real purchasing power is 35 percent greater in Mississippi than it is in New York…

It’s generally the case that states with higher nominal incomes also have higher price levels. This is because in places with higher incomes, the prices of finite resources like land get bid up. (This is especially true in cities.) What is also true is that places with high costs of living pay higher salaries for the same jobs. This is what labor economists call a compensating differential; the higher pay is offered to make up for the low purchasing power.

While this is interesting and possibly fodder for discussing relocation or retirement options, the state-to-state comparisons miss a major factor, alluded to above in the “especially true in cities” parenthetical. The “best bang for the buck” states are also generally (not always) states without major metros.

Within Washington, the cost of living differentials can be significant. Seattle, with its fifth highest cost of living among major metros, no doubt drives the state-to-state comparisons, as it is the dominates in both population and economic influence.

Still, the comparisons are fun to consider.

Less fun, however, is the concluding observation in the Tax Foundation piece.

This has substantial implications for public policy, which is often progressive with respect to income. Many policies–like minimum wage, public benefits, and tax brackets–are denominated in dollars. But with different price levels in each state, the amounts aren’t equivalent in purchasing power.

As we’ve written before, that argument can also apply to state minimum wage policies. Oregon, for example, has adopted a different minimum wage for Portland than for the rest of the state. Good public policy will recognize regional variations.