The Consumer Price Index for All Urban Consumers (CPI-U) increased 0.8 percent
in November on a seasonally adjusted basis after rising 0.9 percent in October,
the U.S. Bureau of Labor Statistics reported today. Over the last 12 months,
the all items index increased 6.8 percent before seasonal adjustment.

Just about everything is affected.

The monthly all items seasonally adjusted increase was the result of broad
increases in most component indexes, similar to last month. The indexes for
gasoline, shelter, food, used cars and trucks, and new vehicles were among the
larger contributors. The energy index rose 3.5 percent in November as the
gasoline index increased 6.1 percent and the other major energy component
indexes also rose. The food index increased 0.7 percent as the index for food
at home rose 0.8 percent.

Inflation has been inflicting a heavy burden on consumers, especially lower-income households and particularly for everyday necessities. It has also negated the higher wages many workers have received, complicated the Federal Reserve’s plans to reduce its aid for the economy and coincided with flagging public support for President Joe Biden, who has been taking steps to try to ease inflation pressures.

Over the past 12 months, the costs paid by a typical American family have surged by roughly $4,000, according to calculations by Jason Furman, a Harvard economist and former Obama White House aide.

$4k is not trivial. As the AP notes, economists are divided as to how – well, we can’t say “transitory” anymore – lets say “enduring” the elevated inflation numbers will be. Policy choices made in the coming weeks and months will make a difference.

A quick review of recent polling confirms that rising prices are a major concern for American families.

Paying everyday household bills, and inflation specifically, top the list of concerns American families say they currently face, with the number saying it is easy for them to pay grocery bills dropping by 13 points in the past two years.

In the late November NPR/Marist poll, respondents said their top economic concern was inflation, but in this survey, people were pessimistic that either the infrastructure or social safety net bills would help curb it. Only about a third said so of both…

Overall, 61% of respondents said things in the country are going in the wrong direction.

With the economy a top concern, inflation plays heavily into voters’ thinking about the right direction/wrong direction question noted above. And voters are pessimistic.

Thirty-one percent (31%) of Likely U.S. Voters think the country is heading in the right direction, according to a new Rasmussen Reports national telephone and online survey for the week ending December 2, 2021. 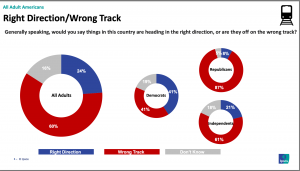 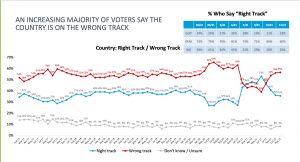 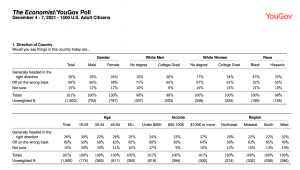 And so on. You get the idea. David Leonhardt writes in The New York Times that the gloomy perceptions are spot on.

In recent weeks, economists and pundits have been asking why Americans feel grouchy about the economy when many indicators — like G.D.P. growth, stock prices and the unemployment rate — look strong.

Sure, some major statistics look good, and they reflect true economic strengths, including the state of families’ finances. But the economy is more than a household balance sheet; it is the combined experience of working, shopping and interacting in society. Americans evidently understand the distinction: In an Associated Press poll, 64 percent describe their personal finances as good — and only 35 percent describe the national economy as good.

There are plenty of reasons. Many services don’t function as well as they used to, largely because of supply-chain problems and labor shortages. Rising prices are cutting into paychecks, especially for working-class households.

Today’s inflation report is unlikely to make anyone feel better.